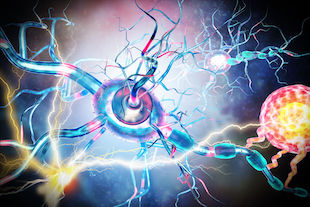 Multiple sclerosis is classified as an autoimmune disease – a disease in which the immune system attacks the body and the body is unable to defend itself against the attack.  You can easily see the correspondence between Mars and this definition – there is an attack and a lack of defense, both are Mars factors.  I have written before on this subject generally here, and on multiple sclerosis particularly here.  Autoimmune diseases, for which no medical reason can be found, are often considered to be psychomatic which is infuriating to patients for whom symptoms are very real.  In my view, the interconnectedness of the body, mind, spirit system means that there is no real difference between a so-called psychomatic illness and any other type.  There is no test for multiple sclerosis – it is diagnosed by excluding other pathogens and evaluation of symptoms. 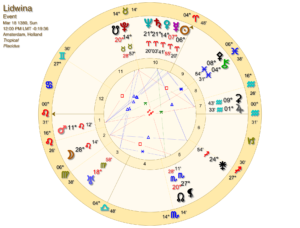 Lidwina. According to this fascinating article, the earliest recorded case of multiple sclerosis was found in a Dutch saint named Lidwina who was born, according to Wikipedia, on March 18, 1380.  Lidwina was born with four planets in Aries, plus Neptune.  Aries is ruled by Mars, and planets in Aries are meant to act forcefully and with courage.  This stellium of four planets in Aries is a powerful force of aggressive and assertive energy.  As if that weren’t enough, she had Mars itself in the highly expressive sign of Leo opposed by Jupiter, which expands and amplifies the energy of Mars.  Clearly she had the power of Mars energy in abundance, so where was the blockage of that energy?

We don’t know her time of birth so we can’t know the degree of her ascendant or the structure of the chart, but we do know that Pluto was in a challenging square to her chart, blocking her fire at every turn.  And her story reflects this:  At the age of 15 she had a fall while ice skating and is said to have been in pain after that for her entire life.  At the time, her progressed Sun (reflecting her evolving Self) aligned with her natal Saturn (planets of tests and challenges).  Two years after that, at the age of 18, her progressed Sun aligned with progressed Saturn, completing that cycle.  Wikipedia reports that by the age of 19 both of her legs were paralyzed (although no source for this information is given).  Lidwina is a classic case of what I call Mars Problems in that she had a fiercely powerful Mars energy permeating her entire chart, with a giant block from Pluto as well as Saturn.

Selma Blair has been in the news recently after announcing on Instagram that she has been diagnosed with multiple sclerosis.  Her chart is completely different from Lidwina’s whose chart contained a furious amount of fire that was blocked; Selma’s chart has no fire other than Neptune in Sagittarius.  (I have found in years of working with the energies of the chart that the outer planets do not provide elemental influence to the personality – instead they serve to inspire and motivate transformation.)  We don’t really know what time she is born, although we are given a speculative time by Sy Scholfield of astro.com showing Leo on the ascendant, that time is not reliable.

Selma has the Sun in Cancer, along with Mercury, Mars and the South Node of the past.  In fact, Mars conjoins the South Node which suggests that Mars issues are something that she was born with, and which need to be resolved in this lifetime.  A lack of fire in the birthchart, especially combined with a heavy water emphasis (she also has a Scorpio Moon as well as the three planets in Cancer) can bring about an imbalance which can be seen in immune disorders.

Chronic rage in the chart. I want to be sure it’s clear that it’s not the astrological chart that creates these situations – each of us reacts differently to the influences in our birth chart which is why it’s so difficult to predict exact events or experiences from certain astrological factors.  But when I see a client with chronic health problems, Mars is the first place I look and usually will tell the story.  Chronic rage is a well-documented source of health issues, but the effects of repressing anger and rage is less examined but not completely unknown:

Italian researchers assessed 195 patients with MS, using a range of scales that measure anger, depression and anxiety, and then compared them with the general population.

They were surprised by the results, which showed that while patients experienced almost twice the normal level of withheld anger and exerted low levels of control on their anger, their expressed anger levels were similar to the general population.

This, together with the fact that the elevated withheld anger levels were not related to the severity of the patients’ MS, suggests that these inconsistent changes were caused by nervous system damage, rather than an emotional reaction to the stress of the disease [or perhaps the repressed anger IS the cause of the disease, or at least associated with it].

Cure and prevention.  Mars problems include depression, and depression is closely linked to MS as well as other immune diseases.  How to solve or prevent Mars problems?