At any rate, once Jupiter turned direct the US stock market as represented by the Dow Jones average continued to climb until it began to drop on October 4th just as Venus, the planet ruling wealth and beauty, turned retrograde in Scorpio, the sign of shared resources such as debt and stocks.  Stock prices struggled to rise around November 8-9th.  While it’s true that this occurred just after the US elections, which often signal a shift in financial market sentiment, it also coincided with a shift from the Moon’s North Node out of Leo.  Financial astrologer Ray Merriman says

“According to Louise McWhirter’s research, published in McWhirter’s Theory of Stock Market Forecasting (American Federation of Astrologers, 1938, Tempe, AZ), the economy and stock market often top out when the Moon’s North Node is in Leo. My own research shows that this is generally true, but a range extending from mid-Leo to mid-Taurus usually contains the top. But most of the gains in the economy and stock market are over by the time the North Node leaves Leo. “ 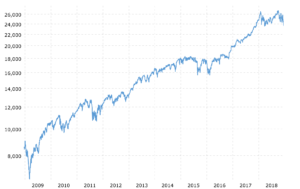 The North Node entered Leo in June of 2017, and this period certainly has corresponded with a peak in the Dow Jones average.  But to keep things in perspective, this chart shows how the market has increased rather steadily since 2009.

Not only did the North Node move out of Leo into Cancer, and three planets changed direction which often indicates a change in the collective mood (Uranus turned retrograde, Venus turned direct,

Mercury turned retrograde), Jupiter moved into its own happy sign of Sagittarius which seemed to inspire market analysts to cheer the divided congress as a harbinger of higher stock market returns.  However, that Sagittarian optimism is competing with the dour nature of both Saturn and Pluto in Capricorn, Saturn’s own sign.  Optimism isn’t enough under these influences – investors want to see hard cold facts that give them confidence to invest.  The initial optimism inspired by a fantasy of a restrained congress soon gave way to fears of gridlock and a government shutdown over President Trump’s vanity wall.

Coming up next year are some planetary configurations that are likely to be rather unpleasant for the stock market.  Jupiter will face off in a challenging square to Neptune, creating confusion and a tendency towards illusion and potentially deception as well.  Just after the initial face-off between those two planets, Saturn will collide with Pluto in an intense conjunction in Capricorn.  Though Saturn and Pluto won’t connect directly until next year, they will get closer enough in April through July to start causing some real problems.

This is a time to tighten up your bootstraps and prepare for a long cold winter.  But don’t despair – we can rely on the indisputable fact that winter is followed by spring