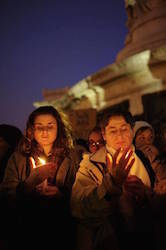 With Uranus, planet of radical behavior and revolution, in Aries, the sign that’s ruled by the God of War (Mars), it is not surprising that there has been an increase in global violence since Uranus entered that sign in 2010.  The square from Pluto (death and destruction) in Capricorn (political and financial structures) exacerbates this even more, and we are heading into the final phase of that cycle (see the sidebar for more information if this is new to you).

In France over the past week there have been several attacks of religious extremists using terror tactics that have shaken the nation to its core.  Astrologers can explain these attacks by citing the fact that both Uranus and Pluto are in stressful aspects to the Libra Sun in France’s universally accepted 1958 chart and certainly this is true, but it is also true of the Cancer Sun in the US chart.  What is perhaps more significant is that as Saturn entered Sagittarius it triggered Mars (planet of warfare and defense) in the France chart.

With Mars in Gemini, the sign of communication, the style of the French has been to fight a war using words rather than armaments, often to the despair of other nations.   In Sagittarius, Saturn challenges all of our belief systems and this will be particularly challenging for France and other countries which attempt to hold onto their cultural identity in an age of globalization.

Pluto’s trip through Sagittarius, sign of foreign culture and travel, witnessed the relocation of millions of immigrants into France, many from north African former french colonies.  This migration helped strengthen the French economy, but also meant a growing percentage of French residents held beliefs that were foreign to the French, including those of the Islamic faith.  Facing growing discrimination, many Islamic youth across Europe are seeking comfort in terrorist cells.

Saturn will soon move away from France’s Mars, for now, but the legacy of colonialism and prejudice in France and many other of the first world countries will not soon disappear.  Uranus is the great equalizer, and in Mars its path is through aggression and violence.