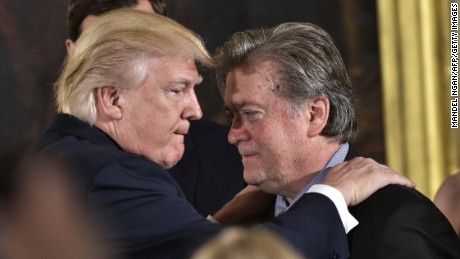 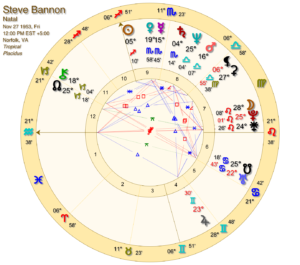 Steve Bannon was born with the Sun in Sagittarius, the sign of ideology, religion, philosophy and expansive thought and goals.  His Sun makes no (major) aspect to any other planet, suggesting that he tends to operate as a loner and may have had difficulty fitting in, even as a child.  His Leo Moon (emotional needs) craves attention and validation from others, but it is locked in a death match with Pluto, planet of obsession, death and power.  This dynamic suggests a challenging home life in childhood and since he was the middle child of five, this planetary placement suggests that he struggled to be seen by the parents and acted out for attention.

Mars is the planet that we typically associate with anger and rage – it is the force of assertiveness and motivation that when thwarted is transformed into a monster of resentment and outrage.  Bannon’s Mars is in the peace loving sign of Libra, making it more difficult to express one’s needs and desires outwardly. The fact that Chiron, denoting psycho-spiritual wounding, is in a challenging aspect to his Mars echoes the difficulty that his weak Mars has created in his life.  This is an individual that found it difficult to get what he wanted out of life and became more and more frustrated as a result, to the point where the rage could no longer be contained.  Uranus, planet of radical behavior, is also in stressful aspect to Mars, encouraging this reactionary approach to self-expression and reflecting the incendiary nature of the comments made about him by those who know him well.

This combination of planetary frustration made him restless and unable to stay in one career for very long.  He joined the navy but was restless, and during his Saturn Return graduated from Harvard business school.  He joined Goldman Sachs but left soon after to start his own investment firm. He financed films until he became bored with that, and then started making films himself.

With Mercury in Scorpio, he is an intense thinker with strongly held opinions.  His Scorpio Venus means that relationships for him are all or nothing.  This is a chart that holds a lot of power, and also the undoing of the individual if he is consumed by this power.

One interesting factoid in the chart is the challenging inconjunct between the Black Moon Lilith and Saturn, denoting a deeply held distrust and fear of women.  He has been married three times for short periods, and one of his wives charged him with domestic violence.

The challenging dance between Uranus (breaking up the status quo and fostering rebellion and radical behavior) and Pluto (destroying the old paradigm and forcing the rebuilding of a new one) triggered this Mars system in Bannon’s chart between 2015 and 2018 as the Trump campaign was unfolding.  Trump and Bannon have a lot of links between their charts which intensifies the connection between them. Trump’s ascendant falls right on Bannon’s Moon, so Bannon must have felt that Trump understood him. Trump’s Sun falls right on Bannon’s Jupiter so Trump must have felt that Bannon could help expand his agenda. But Trump’s Mars falls on Bannon’s Pluto, which means that power issues were inescapable.

As Bannon continues to rage against the political machine, he will soon find he has no machine of his own with which to fight his petty wars.  Though he is still in charge of Breitbart News, rumors of his imminent ouster are rampant.  Still, Bannon will enjoy a number of empowering Jupiter transits over the next year which will serve only to expand his confidence and encourage his brand of schoolyard bullying no matter which pulpit he chooses to use.