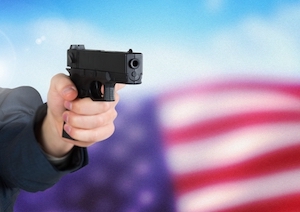 Much of this article is reposted from a post from 2013.  Since then we have had the worst mass shootings in US history:

That’s where Pluto in the second house enters the picture, in the form of the National Rifle Association.  The NRA spent $15 million in the 2012 presidential campaign, using a fearmongering campaign promoting the idea that Obama planned to take away gun rights (he wasn’t).  This same organization used the school shooting in Newtown Connecticut to promote the worry that the government was attempting to take away the guns of American citizens (it wasn’t).  Yet the economic effect was significant: as gun sales accelerated after the shooting, with prices for 30-round magazines rising exponentially.

This, my friend, is what happens with Pluto asserts its hunger for power in the second house of money and possessions.  The fear (Pluto) over the loss of liberty (Sag rising and Uranus/Mars) can generate big bucks (second house).  Military style assault rifles have become the new symbol of freedom: the “musket of today” according to the president of the National Rifle Association.

It’s always helpful to follow the money when attempting to understand something about the United States, and it’s no coincidence that much of the funding for the NRA comes from the gun industry.  From Business Insider:

In its early days, the National Rifle Association was a grassroots social club that prided itself on independence from corporate influence.

While that is still part of the organization’s core function, today less than half of the NRA’s revenues come from program fees and membership dues.

The bulk of the group’s money now comes in the form of contributions, grants, royalty income, and advertising, much of it originating from gun industry sources.

Since 2005, the gun industry and its corporate allies have given between $20 million and $52.6 million to it through the NRA Ring of Freedom sponsor program. Donors include firearm companies like Midway USA, Springfield Armory Inc, Pierce Bullet Seal Target Systems, and Beretta USA Corporation. Other supporters from the gun industry include Cabala’s, Sturm Rugar & Co, and Smith & Wesson.

The NRA also made $20.9 million — about 10 percent of its revenue — from selling advertising to industry companies marketing products in its many publications in 2010, according to the IRS Form 990.

Additionally, some companies donate portions of sales directly to the NRA. Crimson Trace, which makes laser sights, donates 10 percent of each sale to the NRA. Taurus buys an NRA membership for everyone who buys one of their guns. Sturm Rugar gives $1 to the NRA for each gun sold, which amounts to millions. The NRA’s revenues are intrinsically linked to the success of the gun business. …

The chief trade association for gun manufacturers is the National Shooting Sports Federation, which is, incidentally, located in Newtown, Conn. But the NRA takes front and center after each and every shooting.

“Today’s NRA is a virtual subsidiary of the gun industry,” said Josh Sugarmann, executive director of the Violence Policy Center. “While the NRA portrays itself as protecting the ‘freedom’ of individual gun owners, it’s actually working to protect the freedom of the gun industry to manufacture and sell virtually any weapon or accessory.”

There are two reasons for the industry support for the NRA. The first is that the organization develops and maintains a market for their products.  The second, less direct function, is to absorb criticism in the event of PR crises for the gun industry.

With Uranus in Aries since March 2011, this excitement over personal liberty has become almost hysterical.  Uranus itself rules rebellion against the status quo and the kind of radical change that destroys outmoded structures, and in Aries, the sign of the pioneer and individualist, that revolutionary fervor has become more intensely personal.  Uranus will remain in Aries until 2019, so it’s unlikely that we will see this story become less significant anytime soon.  On the contrary, as Uranus continues to bump up against Pluto in a challenging square formation over the next couple of years the story is likely to become more significant and likely, more ridiculous.

Personally, I have  a hard time understanding how a culture that is so obsessed with personal liberty where guns are concerned can be so oppressive when it comes to a woman’s personal health or wardrobe.  In my state of North Carolina the state legislature recently introduced three bills in the same session: two to allow guns in restaurants and in schools, and one to prohibit exposure of a woman’s nipples.

If nipple exposure could generate cash, I am certain that someone would find a way to defend it.  In the meantime, wardrobe violators, be warned!  America’s passion for liberty does not extend into your personal life.  It is only intended for corporations and profit.