Autism: A disorder or new breed of transhuman?

Autism: A disorder or new breed of transhuman? 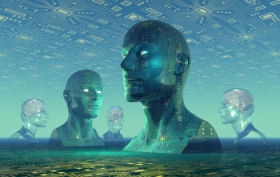 For some time know I have suspected that the growing incidence of autism spectrum disorders is evidence that the human species is mutating in preparation for the Aquarian Age.  Aquarius is the sign of innovation and radical departure from the known and the ordinary, and it also represents the realm of reason and the transpersonal.  Mr. Spock in Star Trek was the quintessential Aquarian personality, and President Obama, with Aquarius rising, is known for his Spock-like detachment and reason.  (Something that’s getting him in trouble now, but that’s another story…)

Now scientists have discovered certain genetic traits in autistic people that differ from genetic activity in people without autism.

The scientists compared the DNA of almost 1,000 people with autism with DNA from almost 1,300 people who do not have the disorder. The findings, described Wednesday in the journal Nature, show that the collection of developmental disabilities known as autism spectrum disorder involve dozens of genes and numerous combinations of rare mutations – so many that patients may each have a unique form [emphasis added].

I’ve written quite a bit about autism over the years and this concept of human mutation, and it appears that science is now catching up with speculative research.  Many people with autism have exceptional skills (rent the recent HBO film on Temple Grandin, it’s quite amazing), as in the case of autistic savants.

This is not universally true, of course, and the lives of autistic children or adults and their families are often filled with stress and despair.  But whether humans are mutating as the result of environmental forces or to adapt to a New Age of human experience, treating this sort of transformation as a disorder does little to help the adaptation process.

Futurists have been talking about a time in the not-too-distant future when technological intelligence will surpass human intelligence, and there will be a melding of man and machine.  If we can adopt a new way of looking at autism, and see this as a transformational development in human history rather than a disorder, perhaps the process can be made a little less painful and even a bit exciting as we head into a Brave New World.  Because really, we don’t have a choice.