Battle of the Gods

Battle of the Gods 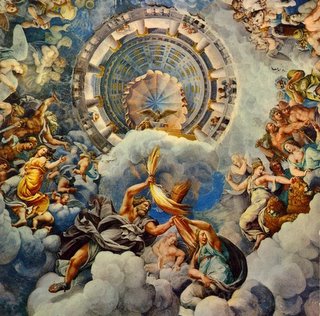 Over the past week or so we’ve seen the effects of warrior Mars opposing confident Jupiter as aggressive rhetoric (Mars) becomes more and more amplified (Jupiter) across the globe. Today Neptune joins the conflict between Mars and Jupiter, obscuring and confusing the conflicts. These three planets are locked in what we call a “T-square,” where Mars opposes (180 degrees) Jupiter, and Neptune square (90 degrees) both Mars and Jupiter. The opposition and square are challenging aspects, where each planet tries to inhibit the action of the other creating a buildup of tension that eventually erupts in major conflict. In the individual personality this can lead to tremendous personal growth if handled properly. In global situations there is rarely the awareness of the need for conscious evolution, and we often end up with tragic results as “might makes right” and the more powerful entity achieves domination.

The aggressive rhetoric produced by the conflict between Mars and Jupiter over the pat few weeks has been mostly philosophical, since Jupiter rules philosophy and theology and (hu)man’s search for meaning in life. With the addition of Neptune into the mix, the battlefield becomes foggy and it becomes less clear who is on which side of the conflict, like a duststorm in the middle of a battle in the desert. Neptune challenges us to dissolve our reality and understand what lies beyond this mundane reality, and when it is in challenging aspect to other planets like it is now, it tends to confuse the issues and create illusion. On the other hand, Mars works hard to pierce those illusions using force. We are certainly seeing this in the US with the Abramoff scandal where governmental agencies are working hard to obscure (Neptune) their involvement, and other forces are struggling to reveal them (Mars).

This T-square will remain in effect for the next week or so as Mars moves out of range, but the effect of the Jupiter/Neptune square will continue. Jupiter and Neptune in stressful aspects can both be unrealistic and deluded – Jupiter with its tendency towards overconfidence, and Neptune with its veil of illusion. Over the next two weeks watch for lots of confusion and unsustainable ideals swirling about. These aspects will affect most personally those with planets in the fixed signs of Leo, Aquarius, Scorpio and Taurus.