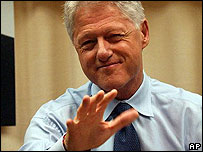 Bill Clinton underwent an angioplasty yesterday to open a clogged heart artery after experiencing chest pains.  Doctors say he is recovering normally and should be able to renew his normal activities soon.

However, I have some concerns about the health of the former president.  Bill Clinton has the Sun in Leo, the sign of development and expression of the Self, and he has Libra rising which is often called the Peacemaker.  Clinton can be quite charming with four planets in Libra plus Chiron, but he also has a rather nasty conjunction of Mars and Neptune sitting right on the ascendant which I wrote about two years ago.

The Sun in the birthchart represents the physical heart, and stressful aspects to the Sun can sometimes bring on heart ailments that then disappear after the planetary cycle is over.  When Saturn squared Clinton’s progressed Sun in late August/September of 2004, he underwent open heart surgery and has been free from problems until now.

At the moment, the combination of Chiron and Neptune, which have been conjunct in the sky for the past year or so and will continue to travel within three degrees of each other throughout the year, are now in an exact opposition (180 degrees) from Clinton’s Sun.  This is a stressful aspect that can bring about the need for emotional healing as well as physical healing.  The conjunction of Chiron and Neptune has been a rather intense experience for many people (you can read more about that planetary combination here) over the past year but now it will hit Clinton particularly hard.

Chiron’s role as the “Wounded Healer” facilitates the release of old psychic and emotional wounds so that we can become more fully healed.  We all walk around with old buried emotional issues that we don’t want to deal with, because we naturally move towards pleasure and away from pain.  Chiron cycles often bring up those buried wounds so that they can be experienced and then released, freeing us through greater self-awareness.  If we are unable or unwilling to face those old wounds as they are revealed to us, we can experience physical illness or ailments instead.

In January, Saturn (challenges, tests, depression) was just within a degree from a transit over all four angles in Clinton’s chart that will return later this year, and Pluto (death, rebirth, transformation) will be in a challenging aspect to those angles beginning this Spring and continuing over the next couple of years.  Next year Uranus, the planet of electricity and radical surprise, will begin to transit those points as well.  This is a huge time of change for Clinton and he will likely have to leave the spotlight in order to take care of rebalancing his inner world.  If he fails to do this, he could end up with serious problems later.