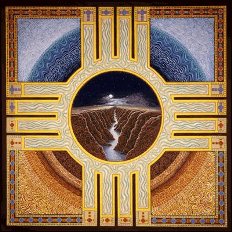 As I’ve been writing and discussing on the radio show, this is the week that the second wave of the Cardinal Drama peaks (the Cardinal signs are the signs of action and initiation: Libra, Aries, Cancer and Capricorn).  Saturn is now in Libra along with Mars opposite Jupiter and Uranus in Aries, Pluto is in Capricorn.

For a few hours tonight, after the Moon enters Cancer at around 6 pm EDT, the Moon will enter the fray, opposing Pluto (180 degree aspect) and forming a 90 degree angle (a square) to Mars and Saturn on the one end and Jupiter and Uranus on the other.  This makes a big Cross, also called a Grand Cross.

Grand Crosses pack a mighty wallop since there is a lot of tension between the planets that demands resolution.  But planets in Cardinal signs are all about taking action, they tend not to get stuck.  So this is a time of change, but there there is little to be frightened of.  There is a lot of energy building and moving and urging us to break through blockages, so it is mostly our resistance that causes problems during these periods.

The cardinal alignment has been building since May, and really peaked in June and July.  At this point we have already integrated the energy and are ready to move on to the next cycle.

The lunar influence will last just a few  hours and by Saturday morning (EDT) the Moon will be out of range and the Grand Cross will have gone back to a mere T-square (just three sides of the cross, without the fourth).

The worst of the astrological storm is over, and in today’s radio show we’ll be looking ahead at the upcoming planetary cycles that will carry us into the next phase.  How can we use this powerful energy we’ve been experiencing?  What steps can we take to bring lasting change into our lives where alterations are necessary?  These are some of the things we’ll be talking about in today’s radio show.

I’ll be taking calls about halfway through the show, beginning with first-time callers.  The number to call is 646-478-5731.

To listen live, click the player below at 11 am Eastern – after the is over it will be archived and you can use that link to listen any time.  For more information about the show and archives of past shows, visit my website.

So be careful this weekend!  There’s a lot of energy stirring about and it can be used for positive transformational work if we stay aware and conscious.

WikiLeaks.org — a whistleblower website — published on Sunday what it says are more than 90,000 United States military and diplomatic reports about Afghanistan filed between 2004 and January of this year.

The first-hand accounts are the military’s own raw data on the war, including numbers killed, casualties, threat reports and the like, according to Julian Assange, the founder of the website.

“It is the total history of the Afghan war from 2004 to 2010, with some important exceptions — U.S. Special Forces, CIA activity, and most of the activity of other non-U.S. groups,” Assange said.

More on the astrological significance later, but I wanted to post this story asap.

The new CIA warnings that Al Qaeda will attempt an attack on the United States in the next 3-6 months is not a surprise to those of us monitoring the stars.  The square of Saturn to Pluto that occurred on January 31st, just two days before the announcement, is an aspect of fear and challenge.  After all, the opposition of Saturn to Pluto, the last major cycle of these two planets, coincided with the attacks of September 11.

The final phase of the Saturn/Pluto square occurs August 21st and that would be a likely time for another attack.  Saturn is in Libra right now, with Pluto in Capricorn.  Both are “Cardinal” signs, meaning they are the signs that mark the turning of the seasons.  Cardinal signs are action-oriented and create a great deal of movement and initiation of new things.  Uranus will enter Aries in late May of this year, and at that point we will enter what Ray Merriman calls the “Cardinal Climax” and other writers have called this event the “Cardinal Crisis,” but I prefer to use the term “Cardinal Drama,” even if it means losing the alliteration of the double “Cs”.  There’s no guarantee that this will be a climax of any kind, or even a crisis.  But there will certainly be drama.

This Cardinal Drama is a major event lasting for the next three or four years, in which Uranus in Aries will face off first against Saturn in Libra, and then enter into a square to Capricorn Pluto which will continue from 2010 to 2013.  (For more on this subject please see the radio show/podcast on the Astrology of 2010.)  Uranus in Aries will bring about violence (Aries) by individuals (Uranus) rather than nation against nation, especially as Uranus gets involved in a challenging square […]