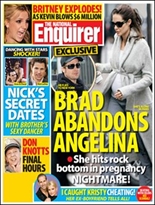 Of course the destruction and transformation (Pluto) of journalism and news (Sagittarius) was something to be expected when Pluto went through Sagittarius, but now that Pluto is in Capricorn celebrities just don’t seem as interesting.  After all, how much can we really read about Lindsay Lohan before we experience celebrity fatigue?  And when so many people are having trouble putting food on the table, the luxury of reading about spoiled rich people does tend to lose its glamor.

Consequently, over the past three years my interest in celebrity astrology has waned, and my focus now is much more on developing tools that we can use to help us to harness the power of Pluto in Capricorn to dig ourselves out of disaster and create new structures that serve us.

I’m curious to know what my readers think – what blog topics interest you these days?  What are your thoughts about celebrity interest?