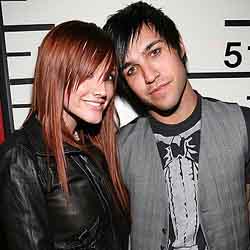 Singer Ashlee Simpson and and her rocker husband Pete Wentz have welcomed a child into the world: Bronx Mowgli Wentz (11/20/2008, time unknown, NYC).  You can tell without even glancing at his astrological chart that he will have quite an unusual beginning!  What a name – named after Bronx, New York, most eclectic of the boroughs, and Mowgli, the child of Rudyard Kipling and Disney tales who was raised by a pack of wolves who goes through quite an identity crisis before deciding to join the human pack.

Bronx Mowgli was born under the sign of Scorpio, at the critical 29th degree.  The 29th degree of any sign signifies a life of transition and growth – it’s kind of a “last chance” to get things right.  This is a significant lifetime for little Bronx Mowgli and there will be a necessity for him to plow into Scorpio experiences that will help him to perfect the Scorpio challenge of living a life that fearlessly delves into the underworld of emotional intensity, passion, and power.  His Sun conjuncts both Mars and Mercury, although Mars (the aggressive drive and instinct) is in Sagittarius instead of Scorpio which suggests that he will be torn between the need to remain focused in the emotional realm (Scorpio) and the need to expand his horizons and search for experiences that are lighter and more buoyant (Sagittarius).  Still, with Mercury  (thought and communication) in Scorpio along with the Sun, he will be an intense little guy who is passionate about everything.

We don’t know exactly what time he was born but we do know that it was Thursday night, so Bronx Mowgli’s Moon is in Virgo, revealing that his emotional nature (Moon) will require a sense of order and good boundaries (Virgo) in order to feel secure.  That Moon conjuncts Saturn, planet of restriction and isolation, which suggests that he is likely to be a lonely child that tends toward sadness and perhaps depression.

The Moon is also opposed (180 degree aspect) by Uranus, planet of innovation and radical change and behavior,  Saturn and Uranus are opposed in the sky right now, and you can read more about that phenomenon here but basically, with these two planets there is a tension between the revolutionary tendencies of Uranus and the need for discipline and restriction of Saturn.  This conflict will be a part of Bronx Mowgli’s nature and it will affect his ability to feel emotionally secure, as signified by the Moon which plays an integral part in this dynamic.

Because the Moon often represents the mother, Bronx is likely to feel that Ashlee is unavailable to him (Saturn/Moon) or that her behavior is erratic and that he can’t depend on her (Moon/Uranus).  It may be difficult for him to make friends and he may be a child who spend more time alone (Saturn/Moon) or with imaginary playmates (Uranus/Moon).  But Venus, planet of love and beauty, forms a trine (harmonious aspect) to the Moon which is an extremely beneficial combination that bestows an ability to get along with others, and also suggests that despite difficulties in his relationship with Ashlee there will be an underlying affection that will overcome the problems that are certain to arise.

In addition Jupiter, planet of abundance and opportunity, forms an exact trine to Saturn and to his Moon as well, which signifies that the loneliness that he experiences as a child will help him to grow and expand (Jupiter) beyond the limitations of his circumstances. He will have an underlying faith in life (Jupiter/Moon) that will help him to maintain a more lofty perspective despite any childhood experiences that challenge him.

This is a wonderful combination of stressful and harmonious aspects that denote a lifetime of evolutionary growth and positive change through challenge.  If he was born between 8 and 11 pm Leo will be rising in his chart, which will relieve some of the Scorpio pressure to remain in the Underworld and will help him to navigate a life in the spotlight.