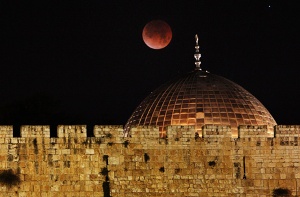 Saturday’s Full Moon is also a partial lunar eclipse, and includes a powerful alignment of seven planets in a Grand Cross formation.

Let’s first look at the lunation (lunar event) itself.  The Sun in Cancer is opposed by the Moon in Capricorn, and because the lunar nodes are within 15 degrees of the Moon (in this case the nodes are 8 degrees from the Moon) the lunation becomes an eclipse.

This in itself is significant, because the lunar nodes are connected to the evolutionary journey of the soul, from past (the South Node) to future (North Node).  Here we have the South Node conjoining the Sun, with the North Node conjunct the Moon.  The Sun represents our conscious awareness, and the Moon reflects the inner yearings of the soul, our emotional interior which rarely makes itself known to the outer world.  With the North Node conjunct the Moon, we are being shifted into an inner experience – the lunar experience rather than the solar.

Here the Moon is in Capricorn, an earth sign of supreme practicality.  Achievement, responsibility, structure – these are not qualities that we normally attribute to the Moon.  In fact, the Moon is said to be in its detriment in Capricorn because its qualities of emotion and fluidity have little room in the structured world in which Capricorn excels.  Yet the North Node is urging us to embrace the gravity of our situation with all of the heart that the Moon can muster as a means to our soul’s evolution during this eclipse of the Sun.

During the eclipse of the Sun the Moon becomes more powerful – even more powerful than it is in an ordinary Full Moon.  Eclipses have been feared for thousands of years, but there’s no reason to fear an eclipse.  Yes – sometimes we do have emotional outbursts, and sometimes our lives are changed forever by a single event that occurs during an eclipse.   Eclipses, especially solar eclipses, have a tendency to unmask that which has been hidden, especially anything hidden in the emotional realm.

The Sun in the eclipse chart is conjunct Mercury, and Mercury is also positioned opposite the Moon.  Mercury is the mind – our mental function and the filter through which the experiences of our lives is processed.  The mind is active now but Mercury has a bigger role to play – it also provides us with the means to move more quickly through the emotional realms of the Moon.

Pluto is tightly conjunct the Moon in the eclipse chart – amping up the intensity and suggesting that something must be released in order for transformation to take place.  Pluto is like the vulture of the zodiac, swooping down to destroy the carrion of anything in our lives that is already dead.  As Pluto is aligned with the Moon in this chart, it opposes the Sun and serves to block the efforts of Mercury to rationalize away the depth of our experiences.   Pluto demands that Mercury offer only the Truth as the emotional realignment of this eclipse unfolds.

Forming the Grand Cross is another opposition:  The conjunction of Jupiter to Uranus in Aries which is opposed by Saturn.   The Jupiter/Uranus combination is volatile and disruptive, but also ingenious and creative.  It breaks down barriers and expands our confidence, forcing us to acknowledge situations and feelings that feel stale or confining.  Saturn provides compression and seeks stability, and the tension between that urge to build a solid foundation (Saturn) and the desire for flight and rebellion (Jupiter/Uranus) is embedded in this eclipse chart.

This eclipse will be felt most powerfully by anyone whose natal planets are in the early degrees of the cardinal signs (Aries, Libra, Capricorn, Cancer).  But there is enough planetary energy locked into this eclipse chart that others may also benefit from its power.  This eclipse is probably the peak of the Cardinal Drama that we’ve been watching unfold over the past year because so many planets are so tightly aligned now.

This is not a time to be afraid – doors are opening now and it’s time to walk through them.  Our world is in a state of terrible dysfunction and a rebalancing is necessary. Any fears and areas of discomfort that arise now are emerging so that they can be seen for the shadows that they are rather than the experiences of reality that we believe them to be.

The planetary events in June will teach us, if we allow them to, what is real and true in our lives and what is illusion. In order to achieve this we need to accelerate our spiritual practice and learn to maintain presence and breathe through any situation that we encounter. The flow of breath through our bodies is the anchor that links us to our higher self and assists in the transition into the higher realms.
In my opinion, this month is the peak of the intensity. Let’s approach it as an opportunity to break through barriers of mind and body, and to allow our higher selves and guides to facilitate real transformation now.
[related_posts limit=”5″ image=”50″]
Share this article...
By Lynn Hayes|2010-06-24T17:24:56-04:00June 24th, 2010|Moon|16 Comments