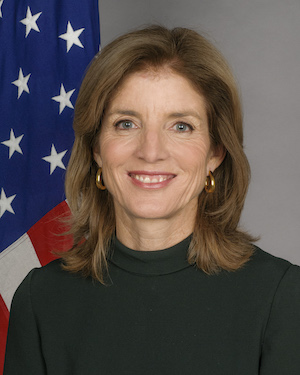 This is not an evaluation of Ms. Kennedy’s qualifications for the New York senator seat, but a look at what motivates a private person to seek a very public office. by Lynn Hayes

Caroline Bouvier Kennedy has led a life that has been at once charmed and full of tragedy. The only survivor of the political era fondly remembered by some as “Camelot” for its beautiful illusion of perfection, she has long shied away from publicity and preferred to work behind the scenes as a writer and as a board member of various nonprofits.

Ms. Kennedy (born 11/27/1957, 8:15 am, NY)  has the Sun in Sagittarius and, if the 8:15 am birthtime is correct, Sagittarius on the ascendant. Normally a Sagittarian Sun and Ascendant denotes an individual of jovial (Sagittarius is ruled by Jupiter/Jove) temperament and character.  But here we also see a 12th House Sun, describing the longing for privacy and a need to be hidden, and Saturn conjunct Mercury, illustrating a serious (Saturn) mind (Mercury) that perhaps leans towards depression despite the naturally buoyant Sagittarian influence.

Pluto forms a square (challenging aspect) to Ms. Kennedy’s Sun, a dynamic which often (but not always) denotes a familiarity with either death or abuse at some level.  Pluto’s intensity can exhibit many forms, and while the Pluto/Sun square does sometimes reveal a violent victimhood, it can also describe the death of a parent or a lifetime associated with death.  We have certainly seen this with Ms. Kennedy, whose father was killed when she was only six, and who also lost her uncle at a young age.

Ms. Kennedy also has a tight conjunction of Chiron (the Wounded Healer) to her Moon (emotions), suggesting a life of emotional pain that requires consistent application of conscious healing in order to be resolved.  The Chiron/Moon conjunction is nearly exactly square to Saturn, which deepens the pain of this dynamic but also builds tremendous strength of character through crisis.

Caroline Kennedy was virtually invisible to the public through much of her adult life, and only emerged on the public stage when she spoke to the Democratic Convention in the year 2000 following the death of her brother, John Kennedy Jr.  The death of her brother was certainly a devastating event, and it occurred as transiting Saturn (challenge and disappointment) formed an exact square to the Chiron/Moon square.  Over the next year, however, Pluto began to make a harmonious transit (a sextile) to the Chiron/Moon conjunction at that time which would have helped to facilitate the transformation of her healing process.

n January of 2008, when Ms. Kennedy announced her support for Obama’s presidency, transiting Chiron was completing a transit to her Moon and natal Chiron.  At this moment, Venus in her progressed chart is exactly conjunct her progressed Ascendant, the point at which we become visible to the outer world.  At the same time, transiting Chiron is making a sextile to her natal Ascendant, completing the process of healing and deepening into a personal comfort level.  This has likely been a long journey of healing for her, and her emergence onto the political stage is very likely a part of this personal healing journey.

Over the next year Chiron will continue to work on her chart in harmonious transits to Jupiter in her chart, the point at which we find faith and belief that life has meaning, and also to Mercury in her chart, opening up new levels of understanding.  She will also have a large number of Jupiter opportunity transits, including a trine of Jupiter to her natal Jupiter which is a very positive event.  The New York governor will appoint the next senator of New York, so she will not have to run for the seat.  I cannot predict whether or not she will be appointed, but it does seem clear that her public life is really just beginning.