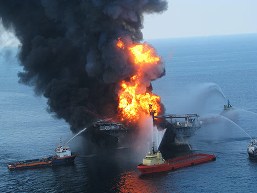 I’m back, and what a wonderful vacation!  But there is so much to write about…

I wrote about this oil spill a few months ago in connection with the conjunction of Pluto to Ceres that was occurring at the time.  But it’s now clear that this eruption is a major ecological disaster that could have horrific long-range effects so I took another look at the chart of the event (April 20, 2010, 9:45 am CDT, coordinates 28N 88W).  This chart shows the approaching Jupiter/Uranus conjunction in Pisces (the sea) straddling the Midheaven and opposite Saturn (challenge and tests) sitting on the Nadir of the chart.  The Moon is in Cancer (more water) and it conjoins the South Node exactly.

I have long written that when Uranus in Aries begins to square Pluto in Capricorn we would see the beginnings of serious earth changes, including earthquakes and volcanoes.  Astrology never works exactly the way we predict because the Universe needs to surprise us into change, and here instead of a volcano we have an explosion of oil from beneath the sea.

This disaster is likely to have long-ranging implications that include changes in the way we approach the hunt for oil (especially as Neptune moves into its own sign of Pisces next year (Neptune and Pisces rule all liquids including oil AND the sea), and with Pluto in Capricorn, the sign of the corporation, we may see the collapse of certain corporations that have had a stranglehold on the global economy such as British Petroleum, the owner of the Horizon rig.  BP has been a major player in the Iraq oil fields as well, and it is my hope that when Uranus comes along to square Pluto some of these megalopolies will be destroyed.