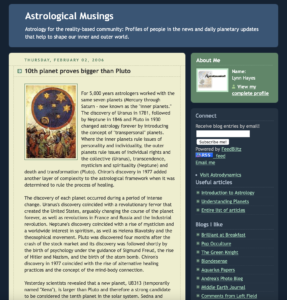 It was a balmy Thanksgiving day that the original form of this blog entered the world. Blogging was still fairly new, but I had a thirst to write about the astrological connections between the way I view the world and the astrological underpinnings and time cycles. I still have that thirst, sometimes more than others, and this blog has been a lifeline for me to share these thoughts with others.

I started out on Blogger, the original blogging platform. My sister was already blogging her unique brand of political sarcasm, and she helped me get everything set up. I had already been writing my monthly astrological report which I started back in the early 1990s, and couldn’t wait to get started. In those early days there were only a handful of blogs, and those of us that started early, April, Elsa, Neith aka Diane, and Robert, still post regularly. Most of the other bloggers have sadly disappeared..

Many of you have been with me since the beginning. Those were the early Bush II years and my writing leaned towards the political, but over the years the appeal of the political landscape began to wane. I still cover politics, of course, but my perspective is less partisan and, I hope, more nuanced. 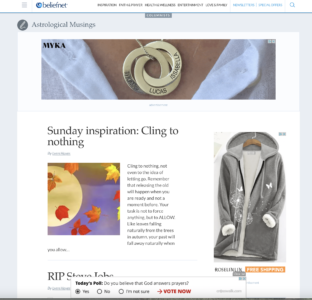 In early 2010 the blog was picked up by Beliefnet, the largest spirituality website in the world and then by Patheos which resulted in threats of lawsuit and the eventual trademarking of the blog title. Those big sites promise eyeballs and fame, along with the ability to be paid for writing, but as many […]

2021 reader survey, and how I am changing things

Thanks to everyone who filled out the reader survey! Over 655 people responded which gave me a pretty good sense of what my readers are looking for and that inspired me to make a few changes.  I made a little video about how things are changing which I’ll post below.  Here’s the short version:

Thanks again for your input, and I hope you will enjoy these changes. ❤️