As an astrologer I am always looking for coincidences and interesting links, and the release of a huge solar flare the day that Mars turned retrograde is one of those interesting connections.  Mars represents fire, enthusiasm, drive, it’s an aggressive force.  A solar flare comes from the Sun, but it is fiery in nature and the quality of the eruption has a Martian flare.

There has been a great deal of fear of the collapse of the electromagnetic grid as part of the 2012 phenomenon which supposes that the Solar Max period will occur in 2012, but the Solar Max is actually expected to take place in 2013 or 2014.  There is real astrological significance to those years because the cycle of Uranus in Aries squared by Pluto in Capricorn will be reaching its peak at that time.

In any case, with Mars retrograde our attention is turned to our own inner needs to assert ourselves and find a way to energize our desires and dreams.  The added fiery influence of the radiation from the solar storms may affect our own electromagnetic energy fields and perhaps we can find a way to harness that energy to assist us become more conscious of the way energy works in our mind/body/spirit system.

I’ll be posting tomorrow about the astrological effects of the upcoming Gemini eclipse, but meanwhile please enjoy this story from NASA about the supersized “Moon Illusion.”  (Thanks to Astrococktail for the link.) During the eclipse, most of the light from the Moon will pass through atmospheric effects that will create a red effect around the Moon as it hangs low in the sky.  This will create a magical atmosphere and fits in nicely with the fact that Uranus changes direction that day, turning direct and creating surprising events to promote change and evolution. http://youtu.be/SKtNgD45OB4

Jupiter was almost a star 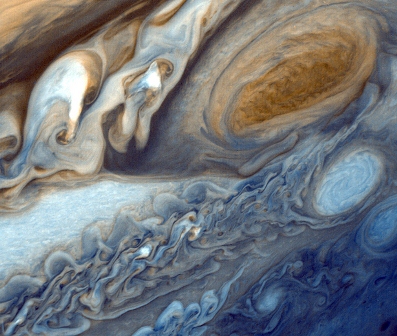 I’m mostly posting on this because it’s such a fantastic photo from the Cassini probe (Source: Daily Galaxy).  The article is pretty incredible too:

Jupiter, the most massive planet in our solar system — with dozens of moons and an enormous magnetic field — resembles a star in composition, but it did not grow big enough to ignite. The planet’s swirling cloud stripes are broken by storms, the most massive being the Great Red Spot, which has raged for hundreds of years.

New thermal images from powerful ground-based telescopes show swirls of warmer air and cooler regions never seen before within Jupiter’s Great Red Spot, which has persisted for as long as 200 to 350 years, based on early telescopic observations, enabling scientists to make the first detailed interior weather map of the giant storm system.The observations reveal that the reddest color of the Great Red Spot corresponds to a warm core within the otherwise cold storm system, and images show dark lanes at the edge of the storm where gases are descending into the deeper regions of the planet. These types of data, detailed in a paper appearing in the journal Icarus, give scientists a sense of the circulation patterns within the solar system’s best-known storm system.

“This is our first detailed look inside the biggest storm of the solar system,” said Glenn Orton, a senior research scientist at NASA’s Jet Propulsion Laboratory in Pasadena, Calif., who was one of the authors of the paper. “We once thought the Great Red Spot was a plain old oval without much structure, but these new results show that it is, in fact, extremely complicated.”