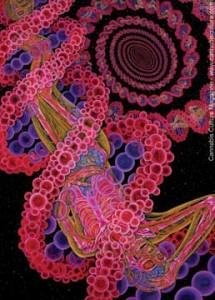 “The Wounded Healer” by Alex Grey.

Chiron has been traveling retrograde since May 25, and changes direction today.  It has been virtually at a standstill since August, holding our feet to the fire as we release the wounds of our past in order to gain in wisdom and true knowledge. The accumulated understanding we’ve gained over the past month or so will have an opportunity for release now.

Chiron is known as the “wounded healer” (read more about Chiron here), but he is much more than that.  Under the influence of Chiron, we revisit the wounds of the past and transmute them into wisdom and the ability to heal and protect in the service of others.  As the bridge between the personal (inner) planets and the transformational (outer) planets, Chiron also provides the inner teachings that facilitate our transformation from ordinary human to transformational being.

Chiron is just completing a conjunction to the North Node now, the 15th being the final phase of a three -part conjunction that began June 1 and hit for the second time August 11.  The Nodes are not planets; they are signposts in the sky that mark the places where the Moon crosses the path of the Sun’s passage through the zodiac. The signposts point to our past (the South Node) and to the future (the North Node). Throughout May Neptune and Chiron both conjoined the North Node, signifying an important event to facilitate inspiration (Neptune) and healing (Chiron). When planets conjunct the North Node they by necessity oppose (180 degrees) the South Node, setting up a tension between the influences that hold us back (South Node) and the pull to continue evolving (North Node) by fully experiencing the wounds of the past and then letting them go (Chiron). Chiron will conjunct Neptune next year, completing the process that was begun this summer.

Tomorrow (October 26) Mercury forms the third phase of a trine to Chiron and a square to Jupiter. Combinations of challenging aspects such as the square and harmonious aspects like the trine can be the most powerful, because the challenging aspects creates conflict followed by resolution and the harmonious aspect facilitates the resolution. This is when real change can happen. For a few days there is a unique opportunity to engage in active debate (Mercury/Jupiter) that facilitates real understanding (Mercury/Saturn), followed by a square from Mars to Chiron and sextile from Mars to Jupiter on the 27th. Here we have Mars acting as a trigger for Chiron’s surgical knife, accompanied by a positive flow of energy (Mars/Jupiter) and a desire (Mars) to learn about the world views of others (Jupiter). This is a wonderful aspect to take us up to Election Day!!