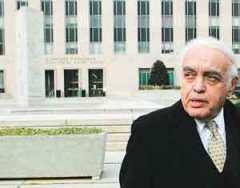 Robert Novak, the self-proclaimed “Prince of Darkness,” died today at the age of 78.  Novak called himself the “stirrer-up of strife” and is most famous for having outed CIA agent Valerie Plame in a kerfuffle that led to the imprisonment of Dick Cheney’s aide Scooter Libby.  Novak was also famously called “The Douchebag of Liberty” by the Daily Show’s Jon Stewart.

My readers may be surprised to learn that Novak’s astrological chart reveals (February 26, 1931, time unknown, Joliet IL)  Pisces Sun which opposed Neptune, the ruler of Pisces.  We astrologers have a sophisticated technical term for this – we call it a “double whammy” – a double signature connecting the Sun, or Self, with the Neptune/Pisces quest for sublimation and redemption.  Novak often talked of his spiritual conversion to Catholicism at the age of 67.  Novak, who was Jewish, attributed this conversion to a “spiritual hunger” and with his wife experimented with a number of different churches.

In researching this article I discovered that Novak did indeed have the soft side and the compassion that we associate with Pisces and Neptune, although it certainly never showed on television or in his columns.  He was on the Board of Directors for the Youth Leadership Fellowship in Washington DC, helping at-risk youth in DC’s poorest neighborhoods.

The Bob Novak that most of us saw is reflected in the conjunction of Venus to Saturn in his chart, and both in the dour sign of Capricorn.  Capricorn is the hard worker – the diligent and responsible realist who is more concerned with success and achievement than family.  The conjunction of Venus to Saturn shows someone who is insecure in their ability to establish relationships and to be liked, and again we have a “double whammy” with Venus in Capricorn, conjunct Saturn which is the ruler of Capricorn.

To make things more complicated and impact his self-esteem even more, Pluto in the chart is opposite both Saturn and Venus which (a) brings about a certain amount of painful  experiences; and (b) adds that dark element to Novak’s personality with which we are so familiar.

Novak was a born rebel, with a challenging square from Jupiter (righteousness and philosophy) to Uranus (rebellion and radical change).  His conservatism, according to his astrological chart, was likely based more on a rebellion against what he saw as a softening of principles that would have been abhorred by the Pluto/Saturn opposition which demands strength and power. I suspect that there was an ongoing battle within him between the softness of the Pisces/Neptune and the hard and tough rebellion of the other planetary pieces of his chart. This kind of inner conflict often hardens our beliefs and makes it difficult for us to see reason.

He had been battling brain cancer over the past two years as transiting Saturn (challenges and restriction) opposed his Sun and squared his Gemini Moon.  He first realized he had cancer on July 23, 2008 when he accidentally hit a pedestrian with his car.  At the time, transiting Mars (action) was conjunct Saturn as it opposed his Sun.