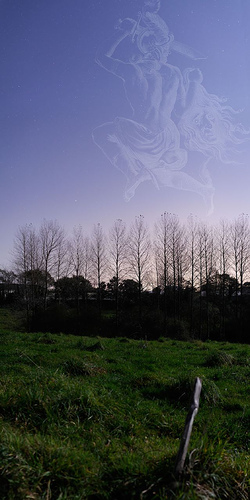 Wildfires, exploding comets…what’s next?
Photo by Laurent Lavender via spaceweather.com.

Up until yesterday Comet Holmes, an obscure comet discovered in 1892, was 25 times fainter than the faintest star that can be seen without a telescope. Suddenly it brightened 400,000 times, becoming clearly visible to the naked eye.

Space.com asks, where did the energy to brighten the comet come from? From outside the comet or within?

Viewers at spaceweather.com report a “nova-like” looking comet whose brightness is not even obscured by the full moon, approximately as bright as the star Polaris, with no tail.

Comet Holmes is traveling away from the Sun and can be viewed near the constellation Perseus between Aries and Taurus. An ephemeris can be found here but I don’t know how to translate this into astrologese, if any of my readers can identify where this comet can be located let me know!