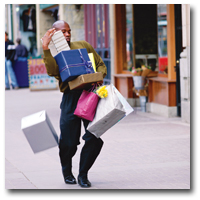 It’s not surprising that consumers breathed a collective sigh of relief in April as Saturn, planet of restriction and limitation, retrograded out of reach of the challenging square to Pluto that has been evoking intense feelings of despair since it began last fall.  In addition we’ve seen Jupiter, planet of expansion and confidence, in the sign of Pisces which can be idealistic and hopeful to the extreme.  (To give you an idea how this works, the radio show I did on Jupiter’s entry into Pisces was titled “Santa Claus in Dreamland.”)

Jupiter is moving ever closer to a conjunction with Uranus which will intensify the urge to break free of the desolation and restriction that has kept consumer spending at a minimum over the past six months.  But Saturn, that Celestial Taskmaster, will oppose the other two and enforce the rules and boundaries of common sense.  Anywhere that improvement in the economy is based on fantasy and delusion, Saturn will force us to come back to earth.  However, it is also true that any improvement that is based on a real recovery will continue unabated.

Uranus is the planet of surprise, and it will briefly dip its toes into Aries at the end of May.  By early June, Jupiter will have joined Uranus in Aries and I suspect the economy will be pushing full steam ahead throughout the world for a month or so, until Uranus turns retrograde in early July.

It’s probably too early to celebrate a recovery, particularly if that recovery is based on consumer spending alone.  A healthy recovery in a Pluto in Capricorn world depends upon a solid foundation, which means good job numbers and a healthy savings portfolio.