Could This Be Howard Dean’s Year?

Could This Be Howard Dean’s Year? 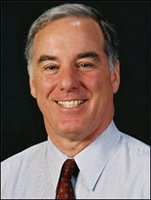 My sister Jill is often doubted by our family, but darned if she doesn’t always turn out to be right. She supported Howard Dean, or HoDee as she likes to call him, in the last election whereas I fell for the smear campaign waged by both the Republicans and his own Democratic party that painted him a lunatic. Dean doesn’t look much like a lunatic these days – he was the one of very few Dems in the primaries that stood out against the war, and he is the only Democrat these days who has a consistent and strong message.

Howard Dean has a Scorpio Sun, accounting for his intensity and passion. Scorpios don’t do anything halfway, and they are the most emotionally courageous of all the signs. They don’t shrink from what must be done, yet they can be somewhat manipulative as well. But Dean’s Cancer ascendant (rising sign), while still emotional, softens the Scorpio edge and gives him the need to nurture others, and Chiron (the wounded healer) conjuncts his Sun, a placement commonly found in teh charts of healers of all types, including medical professionals such as Dean.

With Mercury (communication) also in intense Scorpio and in conflict (square) with Pluto, indicating intensity and a bit of compulsion, he is known for his blunt tongue and often finds his foot in his mouth. However, his Gemini moon desires to communicate and be understood, and rather than fall back in failure he continues to come out and speak for the Democratic party. Saturn (isolation) squares his Sun (spirit), a placement which is very difficult for the young person and often causes shyness and insecurity. However, difficult Saturn placements teach strength and create stability that usually can be seen after the age of 40. This Saturn/Sun square does make Dean a bit of a loner, not a bad thing in today’s political climate of cronyism and corruption.

Mars in Dean’s chart falls in freedom-loving Sagittarius, showing he loves adventure and travel, and it trines Pluto, giving him a great deal of personal (Mars) power (Pluto) and the ability to achieve his desires. Mars does oppose rebellious Uranus so he will never really follow the rules of others.

Over the past year Pluto has been transiting Dean’s Mars, a time of intense energy that has infused him with a strong sense of mission and power. He has also had a number of Jupiter (expansion and opportunity) transits (Jupiter is in Scorpio now and is setting off his Scorpio planets) that have given him a sense of good fortune. Certainly he has been exhibiting a new confidence, appearing on talk shows and standing strong in the face of talking points and lies. A series of Uranus (radical change) transits to his ascendant and his moon have been transforming both his personal and professional relationships. Possibly he has let go of advisers from the past and created a new network. This next year Jupiter will make a stressful aspect to Pluto in his chart, indicating a tendency towards self-aggrandizement and impatience. If handled properly, though, this transit can bring even more opportunities to expand (Jupiter) his personal power and influence (Pluto).

What about 2008? The 2007-2008 period is looking very good for Dean, with multiple harmonious transits of Jupiter, Pluto and Saturn. I’m going to be watching him carefully, and hope that you will too.