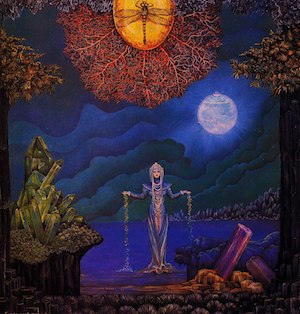 The astrological Moon is generally connected with the archetype of the Mother.  In today’s more gender fluid world, it is not so unusual for a father to be the more nurturing parent and I typically find that the energies surrounding the way an individual is nurtured is found in the fourth house.  The parent who inspires and affects the way we present to the world is found in the tenth house.

Regardless of which parent is most present or most nurturing, though, the Moon is still tightly bound to the Mother – the feminine body that carries the fetus in the womb for 280 days, more or less, regardless of what happens afterwards.

Aspects to the Moon, the sign the Moon falls in, and the general disposition of the Moon in the chart reflects the way the individual perceives the maternal relationship. Our perception of the energy of our mother is not always the same as what the mother is projecting, and I have had to soothe many a mother who comes to me for a reading about her child and discovers a stressed Moon in the child’s chart.

Often, but not always, the sign that the Moon is in reflects the way the child perceives the mother.  A Capricorn moon child perceives mom as being somewhat distant and perhaps cold.  A Virgo moon child feels criticized and not ever good enough.  A child with a Pisces moon may find the connection with mother elusive.

Pluto, the planet of death, is conjunct my own Moon and I often felt that my mother wished I was dead.  In fact, my mother had an abortion before I was born and in a meditation I experienced being that child, before I ever knew about the abortion.  I recently saw an article on Facebook about the archetype of the Death Mother, and we would certainly relate this archetype to a Moon (mother) conjunction to Pluto (death).

When we learn about our astrological chart and see these family dynamics which were present at the time we were born, before any traumatic events occurred, we realize that we incarnated with a predisposition to have these experiences.  In my own theology we are given these predispositions so that we will learn important lessons from these traumas and eventually grow from them.

In the article cited above, Marion Goodman says:

“So long as we are blind to our inner tyrant, we blame an outer tyrant when we fall into darkness.  The focus of our blame can be a person, a political system, a social system, or it can be our own body.  But the moment we turn to blame the initiation fails and we remain buried in the darkness.  We sink ever more deeply into the clutches of the Death Mother. …

Death Mother is born out of despair. It is incubated by the crushed hope of an unlived life. Death Mother is the shadow side of disappointment. …Early in our journey, when Death Mother’s stranglehold is particularly ferocious, and when consciousness is afraid to open itself to the otherness of the unconscious, we experience ourselves as victims of the apocalypse [transformation]; in time as we bring Death Mother to consciousness and begin to experience life beyond her clutches, we may gradually come to see ourselves as partners in the apocalyptic process.

Some of us, lacking a nurturing mother figure, have had to mother ourselves or find friends and partners to take on that role in our lives.  The problem with this is that the original complex involving the mother just gets passed on to the new mother figures. By taking an active role in the process of healing the mother archetype in our own psyche we release the role of victim and become empowered in our own transformation.