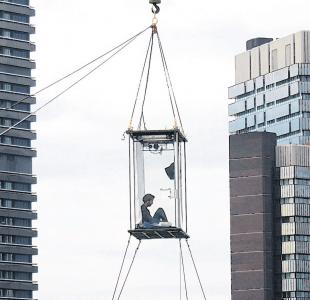 “I believe that fear of life brings a greater fear of death. “
David Blaine

What makes someone want to suspend themselves in a plexiglass box over the Thames and fast for 44 days? What inspires a person to spend 61 hours encased in ice, or stand on a platform on top of a 100 foot pole for 35 hours? As someone for whom the adrenaline rush is a terrifying thing, I had to find out.

David Blaine (chart) is an Aries, and therefore ruled by the warrior archetype of Mars. Aries seeks adventure and is fueled by courage. For an Aries individual, facing danger brings them into a reality where they are able to fully express themselves and the energy of the Mars archetype. Blaine has a triple conjunction of Chiron/Sun/Venus in Aries. Venus bestows good fortune and an attractive persona, and Chiron conjunct the Sun shows that Blaine suffered an early wound (Chiron) in his ability to expess his own identity. Blaine never knew his father (represented by the Sun), and began to learn magic at the age of 4. The world of magic and illusion likely took him out of the pain of the Chiron/Sun conjunction. Blaine’s chart has little water that would anchor him into his emotions, and he will have a tendency to navigate difficult emotional waters through the realm of ideas (Mars in Aquarius).

Mars in Aquarius has a detached quality, and this Aquarian Mars keeps him floating in a place where there is no fear. His Mars is conjunct Jupiter (also in Aquarius), which expands his confidence (Jupiter) and causes a sense of being beyond the boundaries (Jupiter) of ordinary men, bigger than life. There can be a self-aggrandizing quality to Mars/Jupiter that is evident there. In addition, the Jupiter/Mars conjunction is trined by Pluto which gives Blaine a strong sense of empowerment (Pluto) and an ability to manifest (Mars/Pluto) that which he is able to conceive (Aquarius).

Very close to his mother, she died when he was only 21. Because we don’t know Blaine’s time of birth we cannot ascertain his exact moon sign, but this second abandonment must have been extremely painful for him. After his mother’s death, he dedicated himself to the practice of magic.

Mercury (mental function, communication) in Blaine’s chart is in Pisces and makes no aspect to any other planets, something we frequently see in the charts of entertainers. Mercury is the trickster, the shapeshifter. Without aspects to other planets, it operates independently and behind the scenes and this is particularly true of Mercury in Pisces. Mercury shows how we process our experiences, and in Pisces there is tremendous creativity, sensitivity and imagination, but also a tendency towards avoidance.

The astrological picture of David Blaine offers a glimpse into an individual who may be unable to really heal the old psychic wounds (Chiron) that still haunt him from the abandonment by his father and the death of his mother. To assuage his demons, he faces death on a regular basis which releases the Aries warrior within himself and the more public these stunts are, the more courage they require. Blaine has said, “I think pain is easiest to avoid by filling the days with distractions – I wish to remove everything to search for a truth.” This is certainly evidenced by his chart.