“Day of Rage” across the middle east

“Day of Rage” across the middle east 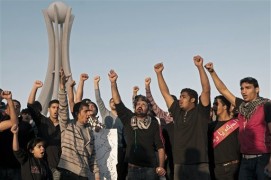 As I wrote a few weeks ago, Jupiter re-entering Aries in January set off a firestorm of anger across the middle east and north Africa.  At the time I wrote:

I can’t help but think this is a good thing, even though like all difficult planetary cycles it won’t be comfortable and is certain to be accompanied by bloodshed.  But balance must be achieved, and it’s the job of Uranus (and Jupiter, to a lesser extent) to emancipate the oppressed and when in a square to Pluto in Capricorn, to destroy (Pluto)  the old structures (Capricorn) that are already rotted and decayed.

Uranus enters Aries in the later part of March, but Jupiter will move ever close to a square to Pluto that culminates in mid-February.  Jupiter brings confidence and demands to be heard – Jupiter after all was the King of all of the gods on Mt. Olympus.  Jupiter refuses to take a back seat to the Lord of the Underworld, no matter how much destruction will ensue.

Today Jupiter is two degrees away from that challenging square to Pluto, and sure enough, unrest is spreading like wildfire as protesters take to the streets all over the world.

This fever is likely to continue as long as Jupiter (in fiery Aries) is in a challenging square to Pluto in Capricorn, representing the power (Pluto) of government, (Capricorn), an aspect that won’t culminate until February 24th.  At that point Mars will have moved into Pisces and tempers will cool for a few weeks, giving us a respite before Uranus enters Aries.