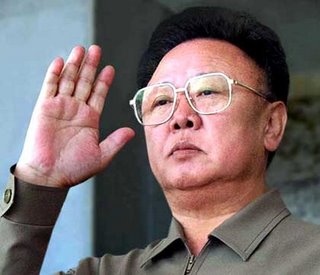 Kim Jong Il has defied the UN and has begun a second test of his nuclear capabilities. Dr. Jerrold Post is a political psychologist with the CIA that recently spoke with the UK’s Daily Telegraph about Kim Jong Il’s psychological makeup:

“He’s not clinically crazy, but he is crazy like a fox and has some major insecurities that help explain how he acts,” Dr Post told The Sunday Telegraph.

Dr Post traces Kim’s insecurities back to his childhood, though in this case it was his relationship with his father – rather than the mother-child bond that is the hub of Freudian analysis – that shaped him. He is the son of the late Kim il-Sung, North Korea’s founder and creator of the state religion of juche, who was given semi-divine qualities by the country’s propaganda machine.

“It is hard enough to follow in the footsteps of your father when he was once a monarch, president or prime minister, as I’m sure George W Bush could testify,” he said. “But those difficulties seem trivial when you succeed a father who had god-like qualities.”

Kim’s rampant insecurities are fuelled, like Napoleon’s, by his lack of height. The dictator only reaches 5ft 2in without his platform shoes, although he tries to appear taller by maintaining a bouffant hairstyle.

Dr Post runs off a checklist of Kim’s character traits — malignant narcissism, extreme self-absorption, grandiose views, paranoid tendencies and defensive self-aggression. To a layman, they appear alarming attributes for a man who may already be in control of a nuclear bomb.

“Kim believes that big boys have big toys. He wants to be a major league player with major league weapons,” said Dr Post, who is now director of the political psychology programme at George Washington University and also a Pentagon consultant.

He believes the timing of last week’s announcement also reflected Kim’s obsessive desire for attention. “He’s been seeing the Iranians, North Korea’s colleagues in the axis of evil, getting a lot of play and he doesn’t want to be outdone.” Amid the analysis, Dr Post also doled out a prescription that will probably not be welcomed in the White House, where official policy rules out any direct talks with Pyongyang.

He believes that the only hope of securing any concessions from Kim is to talk to him, however unpalatable the prospect.

That would not only help give him the status he craves, but also reassure him about his security fears. “Just because you’re paranoid doesn’t mean they’re not out to get you, as the aphorism goes,” said Dr Post. “Kim’s priority is to stay in power.”

Kim’s desperate attempts to gain respect often reach comical proportions — his official biographers recount how he finished his first round of golf at 38 under par and wrote more than a book a day as a student genius.

He is also a film fanatic — his video library reportedly contains more than 15,000 movies. “His view of the world and how he should behave and how others will respond is doubtless shaped by movies,” said Dr Post.

There are a lot of different versions of Kim Jong Il’s birthchart floating around because of the mystery surrounding his birthdate. Although his official biography gives his birthdate as February 16, 1942 Soviet records show that he was actually born in 1941 but that his birthdate was later changed so that he would appear to be 50 years of age at the time of his father’s 80th birthday celebration. The noon birthchart that I’ve posted uses the actual birthdate of 1941.

Kim’s mother died when he was eight, which is shown in his chart by the square, or challenging aspect, of Chiron (deep and painful wound) to his Moon (mother). In addition, Saturn (insecurity and doubt) is square to his Venus (ability to relate to others), showing a deep lack of confidence in his ability to be liked or loved by those around him.

His Sun is in Aquarius and squared by Uranus which is the ruler of Aquarius, so this is a double signature linking the eccentricity, detachment and idealization of Uranus/Aquarius with his personal identity as described by the Sun. The square of Uranus to the Sun identifies him as a rebel and revolutionary, who will not take orders from anyone and instead needs to do things exactly his own way.

This tendency is exacerbated by his Mars (drive and aggression) in Sagittarius; a placement that requires a great deal of freedom and a tendency to become focused on one’s goals to the exclusion of all else. However, that Mars is squared by Neptune, a challenging aspect that can confuse and dilute his drive causing frustration and irritation. The Neptunian theme is carried out by Kim’s Pisces Mercury, the only real water element in the chart. Mercury in Pisces tends to be very sensitive, almost psychic. This sensitivity is not supported by the other elements of the chart, giving him a vulnerability that he has no way to deal with except by trying to maintain control. There is a sense that he is flailing about, trying to establish his place in the world and becoming endlessly frustrated in the process.

His Sun is also the Apex planet of a Yod formation with Chiron and Neptune. The Yod (see below) shows that Kim’s identity (Sun) is being constantly pressured and irritated by both Chiron (wounding and healing) and Neptune (fantasy and illusion). Kim’s father was worshiped by the people as a god, which is a lot for a son to live up to. This constant pressure sends him through phases of painful lack of self-confidence (Chiron/Sun) alternating with a fantasy self-identification (Neptune/Sun). His official biography is full of exaggerations and lies of mythic proportions, such as the idea that his birth was heralded by a double rainbow and foretold by a swallow.

He is desperate for a mirror that will reflect back to him his need for a personal identity, but the world he has created does not permit this. Consequently, he has turned to the world in a desperate attempt for recognition. The problem for Kim is that the recognition he needs is within himself. This is a person who would likely be a bully in the best of circumstances, but given a country and a staff of nuclear scientists his psychological complexes have made him a menace.

Geeky astrological notes on the Yod: (A Yod, or “finger of fate,” includes one planet that is quincunx, or 150 degrees, from two other planets that are sextile, or 60 degrees, from one another. The single planet is called the Apex planet and is the focus of the system. Some writers have said that a Yod must feature an outer planet as the Apex, but I do not believe this to be true. With the Sun as Apex, such as in Kim Jong Il’s chart, the solar identity is the key to understanding the birthchart. )