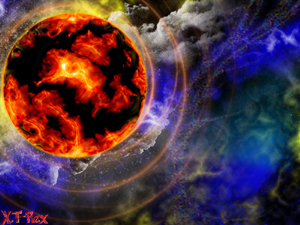 As new and ever more incredible scientific discoveries expand our awareness of what is possible, the new knowledge is beginning to overlap with ancient knowledge that was previously dismissed as fantasy or myth.

A new article on Thunderbolts.info outlines this phenomenon in great detail:

Curiously, peoples on both hemispheres held that such sky holes open and close with great rapidity, not unlike the ‘Symplegades’ of classical mythology. As part of their initiation rituals, prospective shamans of the Wiradjuri people, of southeast New South Wales, Australia, used to believe that they were led upwards by their spiritual guides to the celestial abode of the supreme god Baiame.

From an anonymous medicine-man or ‘doctor’ of the kangaroo totem of the Muri subclass of this nation, interviewed before 1887, comes the following account: “We went through the clouds, and on the other side was the sky. We went through the place where the doctors go through, and it kept opening and shutting very quickly.” Just so, the Tsimshian, of northern British Columbia, observed prior to 1909 that the sky, “a beautiful open country,” “is reached through the hole in the sky …, which opens and closes.” The Buryat are an ethnic minority in Siberia, who envision the sky as a giant inverted ‘kettle’ that alternately lifts up and comes down to the earth; ‘when the cover of the sky is raised, an opening arises between its rim and that of the earth.’

A similar belief was subsumed in the esoteric tradition of Hind?ism. According to this, the universe consists of three layers, the earth, the ‘air’ or atmosphere, and the sky, that look like ‘bricks’ with a perforation in the centre of each. As the soul of the visionary ascends towards the sky, each of the three holes must be cleared to make way: “When the person goes away from this world, he comes to the wind. Then the wind makes room for him, like the hole of a carriage wheel, and through it he mounts higher.” In this metaphysical brand of Hind? belief, the “wind” behaves suspiciously like what is now called the solar wind.

It is believed that the openings form above the earth’s equator and then roll over to earth’s winter pole, which is in the north in December and in the south in July. The holes close as rapidly as they open, NASA’s current estimate being that the two fields of the sun and the earth “briefly merge or ‘reconnect,’ forming a portal through which particles can flow” approximately “every eight minutes.”

If there are spatial portals in the apparatus of the Earth’s atmosphere, then perhaps it’s not so far-fetched to consider the existence of dimensional portals, and what the heck – why not time portals as well!  I would be interested to see if there is a connection between these openings of the Earth’s magnetic fields and the ley lines that appear to connect neolithic sites of ancient mystery along what could be energy fields.

The opposition between Saturn and Uranus that began last fall is likely to bring even more new discoveries (Uranus) that turn established scientific and archaeological understanding (Saturn) on its ears.  This acceleration of scientific knowledge has been growing steadily over the past fifty years, but it seems to be increasing in speed and intensity.  I will continue to cover these astonishing discoveries as they appear to change our world and blow our minds!