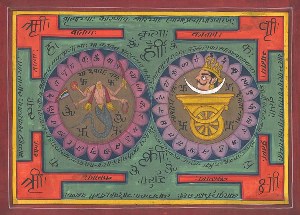 Image of Rahu and Ketu from Exotic India Art

Let’s say you have the South Node in Libra in the seventh house, and the North Node in Aries in the first house.  Libra and the seventh house both long for partnership and we-ness, but your evolutionary destiny is to develop your first house/Aries independence.  But let’s say Venus, describing your relationships, in your chart is in Pisces, the sign that has the urge to merge, and it forms a challenging square to Uranus, the planet of rebellion and autonomy.  Your challenge would be to find a true soulmate relationship (Venus Pisces) yet still retain your autonomy (Uranus).

In this example, the Libra South Node would always pull us towards the world of relationships (Venus Pisces)  it would be a huge mistake to throw out the inner conflict of the Venus/Uranus for the sake of working the Aries North Node that “has to be me,” disregarding the need to find a true soulmate that the Piscean Venus seeks.  Before we can truly move towards the Aries North Node we must integrate our relationship needs successful.  THEN we will naturally move towards the independence of the North Node.

It’s very tempting to want to skip the lessons of the personality to accomplish the soul’s work, but until the personality is fully integrated (or as Jung termed it, “individuated,” we really cannot transcend personality into an experience of pure Soul.

For me, the North Node is like a signpost that’s there to remind us of the ultimate destination.  The rest of the chart is there to help us to prepare and integrate the personality so that we can become free from personal issues and ready to move into the real evolutionary journey.