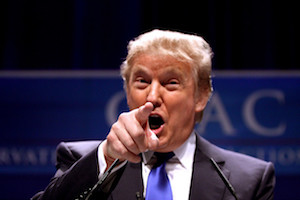 One tool that astrologers use for forecasting is the progressed chart which shows how the individual is progressing through time.  In Trump’s progressed chart, the Midheaven (career and public life) is moving towards an alignment with Saturn (tests and challenges).  This influence causes an individual to look more seriously on their life and desire to take on a greater role with more authority – however, there are challenges to be met with Saturn involved.

Click here for chart.  Beginning in December and January Saturn began a cycle affecting other areas of his chart as well, triggering the Full Moon lunar eclipse in his chart which challenges all of his ideas of who he thinks he is.  The Full Moon personality tends to be larger than life, and because that dynamic is also an eclipse there is an unmasking of the emotions that can be difficult to manage. This Saturn cycle will last throughout 2017.

Beginning in May we will see (and are already seeing) a shakeup (Uranus) in the relationships and alliances (Venus) that Trump has surrounded himself with.  At the same time, harmonious aspects to Mars (aggression) enhances his boldness and desire to act swiftly and without much aforethought although the influence of Saturn will frustrate his efforts to act freely.

I don’t really see anything in these planetary cycles to suggest that the frustration will become severe enough to cause him to quit the presidency.  If he does survive this first year, a challenging square from Saturn (frustration) to Neptune (confusion) will erode his confidence and clarity and make it difficult to find a clear path.  This planetary cycle is usually accompanied by a recommendation not to make major decisions, but of course this will not be possible for the president of the United States.

Let’s not forget that the US Pluto Return will begin in 2020-2021 (just a few short years away), and talk of a constitutional crisis is not surprising.  Pluto cycles tend to bring about intense change and the collapse of systems together with the re-emergence of new ones.  The changes that are occurring in the US political system are merely a harbinger of those changes still to come.