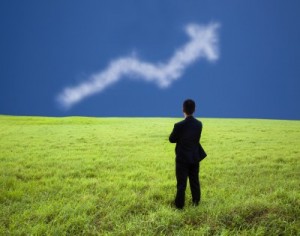 Despite predictions of stock market failure due to the fall and spring eclipse cycle, the stock market continues to defy the odds. Both astrological and financial pundits have been watching for a correction but Jupiter combined with Pluto in the relentlessly optimistic sign of Sagittarius seems to be buoying up the perceptions that drive the stock market. The markets rise with optimism and fall when investors become more pessimistic.

Ray Merriman suggests that the upcoming second phase of the square of Jupiter to Uranus will cause a “sharp reversal” in US stocks. During the second phase of the cycle in mid-May (although the two planets are within one degree in late April), Jupiter is traveling retrograde and Uranus direct as they meet for the second time. While normally we would have to revisit areas where we experienced some quick luck with Jupiter retrograde, a trine from Saturn to Jupiter is likely to stabilize the markets and minimize any sudden shifts of experience. Meanwhile, Jupiter will continue to expand the desire for freedom promoted by Uranus.

Things COULD get very interesting on the 28th when Mars in Pisces conjuncts Uranus and sets off the square to Jupiter. Mars in Pisces often operates secretly so watch for disruptions behind the scenes.