Eulogy for my mother, one year late

Eulogy for my mother, one year late 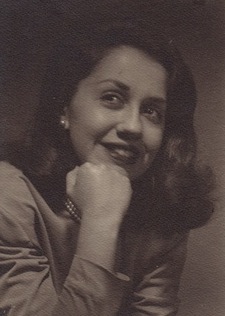 When my mother died on December 19 of last year (2012) I had very little to say about her.  I wrote a post right after her death but it was more about me and my relationship with her.  I was exhausted from her illness and the challenges that surrounded it, and could find very little that was positive to say.

When we started cleaning out her house I found boxes of old photographs and started to piece together a picture of my mother that changed the way I felt about her.  She was an extremely complex individual and difficult to get along with, with a lifetime of depression.  But she was also funny and charming and her life could have turned out very differently if she had made different choices.  Over the past year I’ve had two dreams in which I saw her without the burdens of her depression and anger and despair: as a childlike and innocent soul who is hopeful and pleased by the smallest of things.  My own rage at her dysfunction has fallen away and I can now write a proper euology. 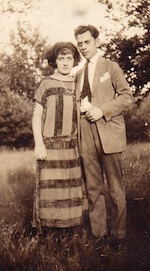 My mother was born Rosalie Bernstein on June 25, 1927 (for you astrologers, I rectified her birth time to 1 am, Bronx NY).  Her parents had come from Europe to escape persecution: her mother from Poland and her father from Russia.  The legend was that they met on the boat, but I don’t know if that was really true.  In any case, within a few years they had moved to Pennsylvania where they settled in Altoona. 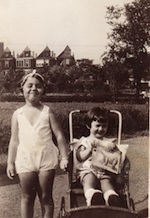 My mom on the left

Rosalie’s parents made a good living in the retail business, and even after the stock market crash and during the depression it appears that they remained comfortable.  Sally, my grandmother (whose name may have been Chana but we can’t be sure) had come to the US with her brother, and in 1933 the rest of the family came from Poland to the US.  One of the treasures I found in my mother’s house was an old can of film that turned out to be film from this family return, along with clips of my mother as a child.  Sadly, the family didn’t like living in America and returned to Poland.

In 1939 Hitler invaded Poland and shortly thereafter my grandmother’s family were all killed in the camps.  The family legend was that my grandmother was mean and cold, but in these old movies she was loving and affectionate and clearly devoted to her family.   The murder of her parents and brothers and sisters, including a favorite sister with whom she was very close, must have changed her forever, leaving  Rosalie with a lifetime of sadness and rejection. 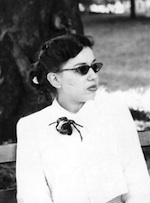 Rosalie was intelligent and charming, and loved to play the violin.  Her younger sister wrote in an autobiography we found that Rosalie had all of the intelligence and charisma in the family, but Rosalie always felt that her sister was the favorite.  This competition for maternal love that had been withdrawn and never returned became a pattern that continued down into the next generation.  Still, after high school Rosalie moved to New York City to follow the single girl’s dream of the time, working as a secretary and enjoying concerts and an active social life.

I’ll skip over the bad marriage and the two kids, of which I was one, and jump to her later life when she met a wonderful man who became her second husband.  He was devoted to her and clearly understood her moods and imbalances, and faithfully remained her greatest defender.  Sadly, this did not fill the aching hole in her heart. She was never able to really believe that she was loved, by her husband, her children, or her friends. 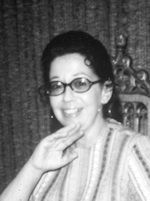 Perhaps it was the watery Grand Trine in her chart that made everything in her life so easy and encouraged her to be lazy, a fault to which she would often and easily admit.  But as she aged and things didn’t come to her so easily – she failed to get the job she wanted and the admiration around her started to fade, her depression increased and she became more miserable.

After he died she moved to North Carolina to live near me and the rest is history.  Perhaps it was watching my mother fail to achieve her dreams that inspired me to become a super achiever and to dedicate my life to helping others to realize their goals and clarify their vision for their life.  I loved my mother fiercely although the anger we felt towards each other often clouded that love and made it difficult for both of us.

I’m grateful for the dreams I’ve had since her death which have opened up my heart to her and shown me that she has indeed found some peace.  I feel now that for the first time in my life I can see her as a three-dimensional person, not just my mother and the veil through which I observed her throughout my life.