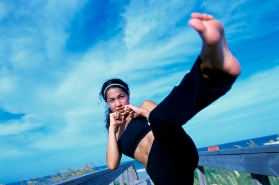 A recent article in the New York Times reports that a study which evaluated the responses of 16 young men with “high trait anger” (short fuse reactions) after exercising on a stationary bike for 30 minutes.

[T]he results of the study suggest  that “exercise, even a single bout of it, can have a robust prophylactic effect” against the buildup of anger, said Nathaniel Thom, a stress physiologist who was the study’s lead researcher.“It’s like taking aspirin to combat heart disease,” he said. “You reduce your risk.”

When the men did not exercise, they had considerable difficulty controlling their racing emotion. But after exercise, they handled what they saw with more aplomb. Their moods were under firmer control.

This will not be news to anyone who has ever been an exercise junkie, but astrologically we can connect this phenomenon with the planet Mars in the birthchart.   This will be old hat to my clients and many of my readers and listeners who have heard me recommend vigorous exercise for anyone with what I call “Mars problems” in the natal chart.
Mars represents desire and the individual will – it describes how we go about getting what we want, and how we defend what we have.  Anger occurs when our desires are thwarted, and if it is left to simmer for too long it erupts into rage.  Unexpressed anger or rage, or what I call “unexpressed Mars,” can be associated with many chronic health problems.
I recommend exercise for people who have a stressed Mars in their chart because exercise helps to put us in touch with that fiery energy that lives in the solar plexus and masquerades as our will.  When we’re pushing and pulling heavy things, or moving faster than we ordinarily would do, we have to reach into our Mars energy in order to fuel our activity, and this helps to activate  the astrological Mars.  Suddenly we feel empowered, excited – ready to break through blockages that hold us back.  This is the role that Mars plays in our chart, and exercise helps a stressed Mars to find its full expression.
A stressed Mars is often shown in the chart as a Mars which is tightly aspected by Saturn, Chiron, Neptune or Pluto, or in the signs of Pisces, Cancer, or Libra.
Share this article...
By Lynn Hayes|2022-09-01T14:48:15-04:00August 21st, 2010|Health & Healing|2 Comments