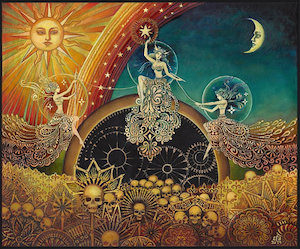 While we may have a certain amount of leverage as to how we react to the internal psychological states that we experience during a given transit, some of the external events that occur in tandem with the transits are frequently out of our control in a concrete sense. With these concrete external events we are still in a position of being able to slightly modify our perception or internal reaction to these events though. However, the argument could be made that even our ability to modify our reaction to external events may be fated or predetermined as well, since that too depends on our own internal dispositions and character traits at a given point in time, and all of this is contained in our natal chart. Of course, our internal reaction to events changes over time as we grow and develop, and this is largely what the study of transits is all about.

It should be noted that many of the astrologers pursuing the ancient traditions are younger than those of us who came up in the time of psychological astrology.  When we are young, we do tend to play out the dynamics of our chart in a much more unconscious way, and as we age we tend to have more control over our impulses and therefore have more control over our fate.

I have been listening to Chris’s podcast and have heard some of the arguments made by the younger astrologers against the idea of free will and the concept of personal transformation, and the idea that planetary transits bring about predictable concrete events is something that I have seen over and over again in my client practice to be false.  Two charts, virtually identical, will undergo the same planetary cycle with very different results as anyone who has read my profiles of criminals will note.

On the other hand, the idea that we have complete control over our lives and can alchemize the planetary cycles through sheer force of will, is also false.  The natal chart that we are born with is completely out of our control and a gift of fate.  The death of a spouse, the collapse of a company for which we work – these sorts of things are completely out of our control and gifts of fate.  We CAN argue, as Chris proposes, that our ability to react to these events from a more conscious perspective, is due to fate or as I would view it, our level of awareness in our evolutionary journey and perhaps this is true.

All of these arguments come down to personal beliefs, because we have no way to know.

These ideas have led to a great debate among professional astrologers which emerged into the public domain with this article on the Quartz website:

Today, modern psychology has cast astrology as a fantastical way that people of the past project the workings of their minds onto the environment around them. This interpretation leaves far too much wiggle room for astrology to simply sound like affirmations of what people want to hear about themselves and think about the world. Even worse, the nurturing approach psychologists take has polluted modern astrology with watered-down interpretations that seek to protect their clients. Even if an astrological configuration spells trouble, the modern astrologer will describe it as an “opportunity for growth,” as if they were a patronizing middle-manager. Where is the trust in that?

The author of this piece, Ida Benedetto, is apparently not an astrologer.  Her bio says “Ida C. Benedetto is an experience designer who sparks new insight through adventure and play. Her recent research outlines the design of transformative social experiences by comparing sex parties, funerals, and wilderness trips.”  I am not clear how this research qualifies her to expound on the validity of astrology.

While it’s true that many modern astrologers, myself included, lack a scholarly background in astrological studies and ancient methodologies that could be helpful in delineating natal charts with greater accuracy, it’s also true that not everything from the ancient world should be considered as gospel truth today.  Astrology no longer governs astronomy, and as a result we are learning about world that lie beyond our entire universe. Ancient Greece also came up with the practice of bloodletting which was used for much of the past 2,000 years to cure a wide variety of ailments, but you don’t hear too many physicians calling for its return.

The fact is, astrological configurations that spell trouble ARE opportunities for growth.  Presenting a situation of impending doom such as the ones described in this earlier article in a consultation in way which will serve only to frighten a client really serves no purpose.  Certainly it must be pointed out that a challenging period is coming, but then there are the situations such as the ones I talked about in this article in which the deaths of two people occurred under a planetary cycle (a New Moon in the progressed chart) which is not notable for death.  In fact I myself had this same planetary cycle myself last summer.  After these deaths I sought wisdom from my traditional astrology colleagues, but found none.

The fact is, we cannot predict the future – note the failure of astrologers to correctly predict the outcome of the 2016 election using traditional techniques.  We cannot look at an astrological signature in an individual chart and predict with any certainty what will happen under that transit.  As astrological practitioners our first duty is to provide our clients with the information that will be most helpful to them – to prepare them for challenges but not to terrify them by offering predictions that may never come true.

This is an interesting debate that is sure to continue!  You can read more about it here on Chris’s website.