Fathers of the Zodiac

Fathers of the Zodiac 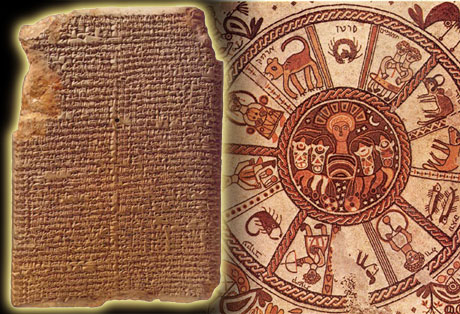 From Nature.com:
(thanks to redicecreations.com for the link!)

Using modern techniques — and some rocks — a US astronomer has traced the origin of a set of ancient clay tablets to a precise date and place. The tablets show constellations thought to be precursors of the present-day zodiac.

The tablets, known collectively as MUL.APIN, contain nearly 200 astronomical observations, including measurements related to several constellations. They are written in cuneiform, a Middle-Eastern script that is one of the oldest known forms of writing, and were made in Babylon around 687 BC.

But most archaeologists believe that the tablets are transcriptions of much earlier observations made by Assyrian astronomers. Just how much older has been disputed — the estimates go back to 2,300 BC.

Now Brad Schaefer, an astronomer at Louisiana State University in Baton Rouge, says he has dated the observations to 1,370 BC, give or take a century.

The tablets contain a number of different observations, including the day each year that certain constellations first appeared in the dawn sky. These dates change over the millennia because of a tiny wobble in the Earth’s axis.

“It’s like a big hour hand in the sky,” Schaefer says.

Although the ancient Babylonians appear to have originated the practice of astrology using fixed stars and the luminaries, it was the Assyrians who seem to have discovered the signs of the zodiac that we use today.