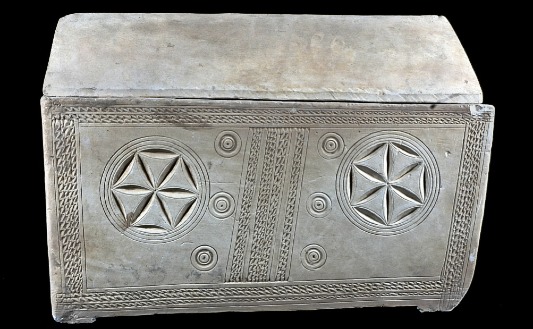 This story falls under lots of categories: Saturn opposing Neptune and destroying the illusion; Pluto in Sagittarius and turning our established theology and religions upside down, and possibly even the end of the Age of Pisces.

When Pluto entered Sagittarius, I had a feeling that this would be the beginning of a series of revelations about mainstream mythologies, and this could be the big one:

Inscribed in Hebrew, Latin or Greek, six boxes — taken from a 2,000-year-old cave discovered in 1980 during excavation for a housing project in Talpiyot, south of Jerusalem — bear the names: Yeshua [Jesus] bar Yosef [son of Joseph]; Maria [the Latin version of Miriam, which is the English Mary]; Matia [the Hebrew equivalent of Matthew, a name common in the lineage of both Mary and Joseph]; Yose [the Gospel of Mark refers to Yose as a brother of Jesus]; Yehuda bar Yeshua, or Judah, son of Jesus; and in Greek, Mariamne e mara, meaning ‘Mariamne, known as the master.’ According to Harvard professor François Bovon, interviewed in the film, Mariamne was Mary Magdalene’s real name.

The bones contained in the boxes have long since been reburied, according to Jewish custom, in unmarked graves in Israel.

If the evidence adduced is correct, the bone boxes, and microscopic remains of DNA still contained inside, would constitute the first archeological evidence of the existence of the Christian saviour and his family.

Tests on mitochondrial DNA obtained from the Jesus and Mariamne boxes and conducted at Lakehead University’s Paleo-DNA laboratory in Thunder Bay, show conclusively that the two individuals were not maternally related. According to Carney Matheson, head of the lab, this likely means they were related by marriage.

More on this later!