New feature! On Fridays I’ll select one of the over 2500 articles I’ve written to revive for today’s times.  Today we explore Edgar Cayce’s unusual views on reincarnation and planets. 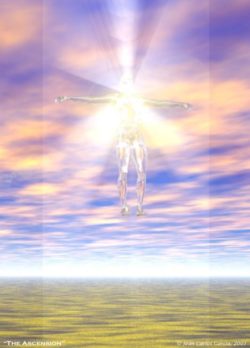 I found this article about Edgar Cayce and astrology linked to the Astrology Weekly forum. I am particularly interested in the comments about the afterlife realms:

Reality is multi-dimensional. We are multi-dimensional beings who exist simultaneously in a multi-dimensional reality. Long ago, our bodies evolved from primates. Even longer ago, our minds evolved from the stars. But before the universe was even created, our spirits have always existed as part of the divine in even higher dimensions. At the conscious (physical) level, our bodies are like a miniature replica of the solar system. Our hearts perform the function of the sun – the center of the system. Other organs within our body are also used by our souls to find a means of expression. The planets exert astrological vibrations upon our bodies that influence our personalities and soul patterns. At the subconscious (soul) level, the solar system is our larger body. We are connected to the planets, the stars, spiritual realms and entities. On the superconscious (spirit) level, we are one with the Whole. At this level, we are on a conscious level with all there is – the divine.

The planet Mercury is a physical representation (three-dimensional) associated with the second afterlife realm, also named Mercury, in the afterlife hierarchy. The afterlife realms are dimensions which souls can experience when not active in the physical body on earth. These non-active states include death, deep sleep, or other altered states that free the subconscious from its normal physical constraints. The planets exert an astrological influence on us.

These astrological planetary influences originate from the afterlife realms that our souls have sojourned before our current earth experience and in between earth lives. The purpose of these astrological influences is to provide certain life lessons we must learn and for which we are tested on earth. Cayce described how we are connected in mind, body and spirit, to various afterlife realms and astrological bodies such as the moon, sun, planets, and stars. In fact, Cayce affirmed that everything is connected together as one. Our solar system is our larger body and our bodies act as a miniature solar system.While on earth, we are influenced in strong ways by desires that originate from our bodies. These desires not only affect our bodies but our soul as well and how we deal with these influences can determine our level of spiritual development. Through meditation and prayer, one can unlock the doors to the many dimensions, the many mansions, of God’s kingdom. But the door must first be unlocked here on this earth realm.

The idea of traveling to interplanetary realms after death is hinted at in ancient Egyptian hieroglyphs which show the journey of the soul through the Duat, the “river of stars” that led to the star Sirius. The old Pharoahs and even ancient Greeks believed that they would become gods after death. Even today Mormon adherents believe that after death they will be given their own planet to rule over (one explanation for the necessity of polygamy).

Cayce says about the Saturn realm:

The Saturn afterlife realm is not a pleasant place according to Cayce. Cayce said this is the realm where all inadequate flesh goes to be redone. A soul may banishes itself to the Saturn realm to begin anew. This place is also known as the Great Changer, the great force for starting over. Sometimes when Cayce would begin a reading for someone, he would identify what the last afterlife realm that soul experienced before entering the earth realm. He would not limit himself to a person’s past lives on earth, but would include their lives in the cosmos as well. During a reading, Cayce told a person he identified as having previously experienced an incarnation in the Saturn realm that “God loves those who are willing to start over.”

That does describe the need under Saturn’s influence to have patience and apply discipline.

Cayce stated that souls reincarnate, not only to the earth realm, but souls also reincarnate to other realms between earth incarnations as well. If a soul incarnates into an earth life from one of these afterlife realms, the soul will manifest the influence of the realm from which it recently came. These influences, which are defined by astrology, are related to the spirit realm associated with the astrological influence of the associated planet.

Of Cayce’s own experiences:

The question of what life is all about can only be answered by an understanding of what happens after death. Much of the ancient wisdom on this subject was eradicated when the monotheistic religions took over during the Age of Pisces. All of this information and theory is so interesting to me, and well worth considering.