Friday repost: Spirit and Fate in the astrological chart

Friday repost: Spirit and Fate in the astrological chart

Every Friday I dig into the archives for something interesting to share with you. This post has been updated from an earlier article. 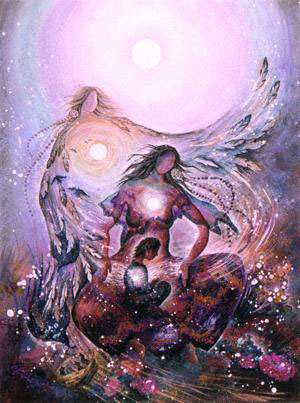 The ancient Greek term “daemon” has come a long way from its original meaning as guardian, guide or higher self,.  The term “demon” gained a malevolent bent in the early books of the Old Testament as nasty creatures who caused disease and plagues, and in the New Testament, they were considered to be angels who had fallen from grace and turned to the dark side.

For Plato, the daemon or guiding spirit was chosen by the soul before each incarnation. For most people the daemon was thought to be an unconscious guiding force, but the occasional enlightened beings were said to be able to communicate with their daemon. In ancient Egyptian astrology, the daemon was said to be symbolized by the Sun sign. Iamblicus, student and teacher of ancient mysteries (280-330 CE) wrote: “”For whether these arts are knowable or beyond comprehension, yet the aura or emanation from the stars brings the daemon to us, whether we ourselves are cognizant of it or not.” These ancient sages wrote before the age of monotheism limited the role of the divine in the lives of men and women, and offered a more personal concept of deity.

The question of fate versus free will is an ancient one, and astrology has been used for thousands of years to determine one’s fate and thereby avoid the painful process of self-discovery. Until the emergence of the outer, or transpersonal planets over the past few centuries, Eastern and Western schools of astrology all taught that one’s fate was preordained by the stars and that very few humans could escape their destiny. One’s horoscope was beneficial or detrimental, and one’s fortune in life was set in stone and easily predicted. Over time, beginning with the discovery of Uranus and its implementation in the astrological pantheon and continuing with Neptune and Pluto, the practice of astrology began to evolve in a way that offered a greater degree of self-determination to the querent.

The birthchart is given to us at the moment we take our first breath on Planet Earth, and will never change. To that extent our fate is predetermined; our basic identity and certain facets of our personality will never change. The planetary systems that form the basic web of the chart show psychological complexes that predispose us to certain modes of reaction and behavior that will remain with us throughout our lifetime. However, we are given free will which enables us to make choices.  We can utilize these very complexes in order to maximizing our true potential and thereby create our own destiny, or we can fall victim to our stars and blame the horoscope.

For the modern astrologer and student of transformation, the concept of daemon as the “higher self” or guiding spirit is a significant one and resonates with the symbolism of the astrological chart. We are all familiar with having desired something which is refused us, only to discover later that the event which actually happened turns out to have been much more beneficial to us in the long run. We see this frequently in the work of the planet Pluto, which I think of as the “will of the higher self” both in the natal birthchart and when it affects us by transit. In the midst of a Pluto event, when transiting Pluto hits a planet in our birthchart, we are forced to let go and surrender, often kicking and screaming, as our higher self removes from our life that which no longer serves us or keeps us from achieving personal empowerment.

The resurgence of Hellenistic astrology has brought about a renewed focus on a more fatalistic viewpoint, although the presence of the ‘Daimon” in Hellenistic astrology is the subject of a recent book by Dorian Greenbaum.  Certainly in ancient times the average man or woman were much more limited in terms of the choices they enjoyed in their lives, so it stands to reason that life was considered fated.  If you were born a king or a serf, that was your fate and there was little way to change it.  In our modern times we have far more choice and control over our lives, although many aspects of our lives are fated.  Where you were born, the family you were born into, the basic personality traits as described in the birthchart – all of these things are fated.  What we do with those qualities are due in part to the fate of the birthchart – certain actions are easier for some than for others.  But two people with the same charts will have two very different lives, much of which is dependent upon the choices that they make.

Understanding the role of the daemon or guiding spirit in our evolution can facilitate the transformational process as we develop a sense of greater trust. As our awareness increases, we are able to more effectively distinguish between that which we can control, and that which is being guided.

When Mercury is retrograde we often see communication and equipment snafus, and things not going according to plan.  There is a “shadow” period lasting about a week on either side when Mercury’s movement is slower than normal. These are excellent times for planning and reflection but not good times to begin something new.  <a href="https://www.astrodynamics.net/me