In my experience with gay clients as well as profiles of well-known people, it seems to me that the LGBTQ experience encompasses a very wide spectrum of attributes.  There are transgendered individuals who experience themselves as having incarnated into the wrong body.  There are “gender fluid” people who are attracted to people of both sexes.  There are gay men who are more feminine than their body suggests, and lesbians who are quite masculine. I have written a great deal about the gender fluidity of the Aquarian Age (this article, for example) and have noticed the presence of the asteroid Pallas in the charts of transgendered individuals.  Uranus rules the Aquarian Age, and Uranus is the planet that turns stereotypes upside down, demanding a new paradigm for examining the world and we are certainly seeing that in the realm of gender identification.” 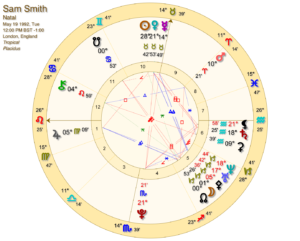 Smith was born under the conjunction of Uranus and Neptune, a period during the early 1990s where the spirituality and potential for illusion of Neptune collided with the paradigm shifting of Uranus.  I have noticed that people born during that time are exceptionally creative and operate on a different frequency than the rest of us, tending not to fit into the nice societal boxes in which we like to operate.

Most interesting in the topic of gender identification though is the presence of the asteroid Pallas in a prominent position in his chart (squaring Mars and conjunct the Moon and North Node).  As mentioned above, Pallas continues to prove herself an important factor in the charts of those who do not identify with traditional gender roles.

This whole discussion operates on a spectrum, and the issue of gay or straight is not always clearcut; nor is the issue of gender identification.  As we continue to move through the portal of the Aquarian Age these distinctions will continue to unravel and a new paradigm of human-ness will emerge.