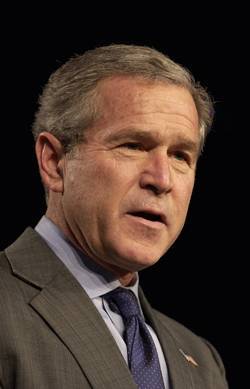 Ever since George Bush began the debacle known as the Iraq War he has been going through a series of problematic planetary cycles that have put him under tremendous pressures and forced confrontations with many of his friends and associates. You can read more about the overall State of the President in this article from January which has links to previous posts as well.

Transiting Saturn is still putting pressure on Venus in his chart, showing difficulties in partnerships and relationships of all kinds. His crony Alberto Gonzales is being scrambled in Congressional hearings, his devotee Condoleeza Rice is being relegated to the back burner after her failed mission to repair the international alliances which her boss had destroyed. Despite the pressures of Saturn, a planet that normally has us retreating into darkness as we prepare our next move, Bush is out wielding his sword all over the place, the schoolyard bully trying to bluff the bipartisan Congress with his phallic veto powers.

George Bush’s current transits are a lesson in the fact that harmonious transits are not always a good thing. Jupiter in Bush’s natal chart is square to his Sun, an aspect that tends to create an aggrandized (Jupiter) ego (Sun). Currently, transiting Jupiter is trine Saturn and sextile Neptune, and all three planets are aspecting this Jupiter/Sun square. So we have transiting Jupiter expanding Bush’s sense of self-importance even more and Saturn adding stability to the mix. Meanwhile Neptune is opposing Bush’s Venus, making it difficult for him to see his relationships with any clarity.

Most alarming, transiting Jupiter began an opposition cycle to Uranus in Bush’s chart back in February, exciting his rebellious nature and causing his expanded ego (Jupiter/Sun square in his chart) to demand new forms of expression (Uranus). The Mars/Uranus conjunction over the past few days has aspected Bush’s natal Uranus, throwing more fuel on the fire. He is impatient now and more likely to take action without thinking.

Bush may begin to lose some of his bravado over the next few weeks as transiting Mars opposes Neptune in his chart, a short-term event which normally creates confusion (Neptune) around what we want and how we get it (Mars). Early June could be problematic as well, with Mars making a square to his Sun which tends to stir up anger and resentment, and Mars opposing his Chiron which can bring up painful issues from the past. In addition, transiting Mars will oppose Bush’s progressed Mars – more aggression and belligerence, and then during the second week of June we have Mars opposing his natal Jupiter, demanding recognition. After running wild with his pals Jupiter and Uranus, Bush’s Mars faces obstacles in the third week of June with Mars making a square to Saturn. With Saturn conjunct his Venus at the same time we may begin to see more of an attempt towards conciliation as his dealings with others become more difficult.

The Mars events continue into July, making it very likely that the battle with Congress will continue into the summer. Hopefully the President can see far enough past his own ego to be able to work with the rest of the US government and solve the major problems facing the country.