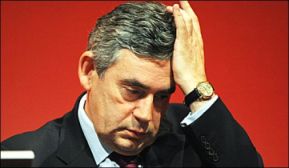 With Jupiter Rising in Aquarius, it believed (Jupiter) it could create a better world (Aquarius). Tony Blair’s Moon in Aquarius harmonised with this, and gave him the ability to connect this vision to the people. The MC in Sag also describes this sense of mission to the world. Mercury retrograde in Taurus square to Uranus and Neptune shows the desire to communicate this vision in a practical way, but not always successfully. Tony Blair’s Sun at 15 Taurus conjoins the New Labour Sun at 11 Taurus (and Venus at 19 Taurus), making him its natural leader (Sun).

When Tony Blair left as leader in June 2007, Neptune had been conjoining the New Labour Jupiter, reflecting the loss of self-belief by the party, the disillusion that Tony Blair had brought about, mainly over Iraq. Brown’s time as leader has seen Neptune finally cross the Ascendant in Feb this year, with 2 more crossings later in the year. Given what has happened so far – and Brown’s leadership has been under question, on and off, almost since the start – this transit looks likely to bring about an almost complete loss of vision by New Labour.

As for Brown himself, what we see natally is a fiery character with vision (Aries Rising and Leo Moon) who is nevertheless unable to give direction to himself or those around him (5 personal planets in 12th House Pisces). As a Pisces, Brown is able to shapeshift, to project the strong-man image when he speaks. But the rumours have always been of his authoritarianism, indecisiveness and inability to lead. I think his authoritarianism is partly his Moon conjunct Pluto in Leo; but I think it is also that weird, wilful thing you sometimes find in very Piscean people, who seem to sense and fear their own inner powers as threatening and chaotic, and try to control themselves and everyone around them to keep the ocean at bay. It is Canute syndrome.

Although Brown has an Aries Ascendant, its ruler Mars is in 12th House Pisces, which is a very difficult placement for someone who needs to be, and to appear, strong and decisive. It is also opposite an inhibiting Saturn (which, to be fair, has at the same time given him an ability to apply himself long-term to his personal goals). As Tony Blair’s Chancellor, he was a master of passive-aggressive behaviour, never daring to speak out against Blair, not even standing against him in the original election to be leader; he was, however, forever plotting against him. It is not a good quality for a leader – or for anyone, I suppose. For the last year we have seen Uranus conjoining Brown’s Mars, and in some ways we have seen some surprising leadership from him, particularly through his handling of the financial crisis when the world teetered and Brown saved it (Pisces), or so he seemed to think. But broadly speaking, a Uranus-Mars transit, when Mars is so afflicted, is unlikely to result in the steady leadership that he is so fond of projecting, but which his colleagues clearly do not experience.