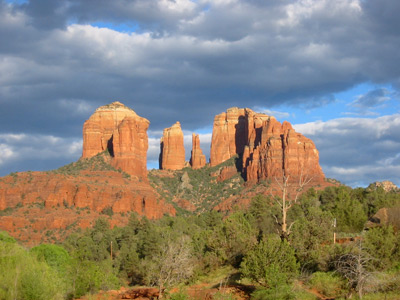 There’s a lot of hype around Sedona, but there’s no doubt that this is an incredible place.  I  dragged my husband Rich along for the week while I enjoy a few days of expanding my astrological horizons at the Blast Astrology Conference, and we spent all day yesterday exploring the incredible surrounding area after seeing the Grand Canyon the day before.  We wondered if the whole vortex thing might be a big hype, but after spending a day driving through the rocks we both agreed that the energy here in Sedona really is powerful!  Sedona is known for its vortexes, which are concentrated points of energy.  Yesterday we drove by this incredible rock formation (my photos didn’t turn out that well because the Sun was very strong, so I borrowed this one from Marc Jennings’ photographic website.).  Rich and I were both struck by the power we felt emanating from this formation, and later found out that it is Cathedral Rock, one of the more powerful vortex sites.

This morning was the first of my Blast workshops, both on locational astrology.  I found the lecture by Scott Wolfram particularly interesting as I had never heard of the Geodetic maps which place the zodiac around the globe based on the longitudinal map with Greenwich at zero degrees, offering clues to the way different cultures organize by geodetic zones.  For example, the Aries Midheaven line runs through Europe, which values individual freedoms whereas Russia and the middle east countries fall in the Taurus Midheaven line, valuing stable social structures more than individual freedoms.  He drew a few fascinating examples, such as that of the Ukraine which straddles the cusp between the Aries and Taurus midheavens and is split between the portion of the country that wants to stay aligned with Russia, and the portion that wants to join NATO and be independent.  Another interesting example was that of Peter the Great, who established his capital Petersburg right on the 0 degrees Taurus line on the cusp of the Aries/Taurus sections, and called his new city the “Window into Europe” (Europe being in the Aries portion).