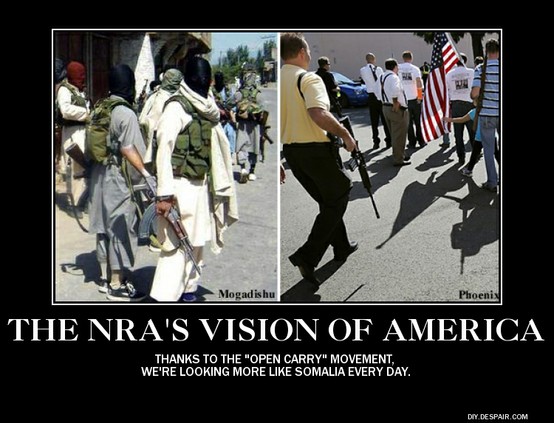 More than any other sign, Aries is associated with warfare.  Ruled by the planet Mars (Mars is the Roman name for the god of war – Ares was his Greek counterpart, Aries is assertive, energetic, and generally doesn’t like to back down from a fight.  Uranus is the planet of rebellion, independence, freedom and liberation.  It’s not a surprise then that the passage of Uranus in Aries (since 2010) has brought with it a huge wave of rebellion against gun laws among gun aficionados in the United States.

As soon as Uranus moved into Aries in 2010 there was an eruption of “open carry” demonstrations throughout the US by gun rights supporters who believe that carrying guns openly is a good idea.

I predicted this before Uranus entered Aries:

Under Uranus in Aries, gun rights have become synonymous with freedom, such as this article proclaims:

Other countries are not seeing the same kind of gun revolution – the revolutionary force of Uranus in Aries is manifesting differently around the world.  In much of the middle East and portions of Africa we are seeing the splintering of governments as individual revolutionary groups attempt to take a foothold.  In Europe a lack of leadership has resulted in a breakdown of conventional political forces:

All over the democratic world — in what we used to call The West — we are witnessing nothing less than a revolution. From the United States, through Britain, through Western Europe and central and eastern Europe, to the democracies from India to South Africa, the people have had enough of being patronised. They want to take power back into their own hands. The kind of “oligarchic democracy” we have become used to will no longer do.

Human history has shown a tendency to swing from one extreme to another before finding a synthesis in the middle.  Planetary cycles tend to sniff out areas of dysfunction so that they can be rectified, and sometimes the process of coming back to a point of balance can be stressful.  Uranus will remain in Aries until 2018, so we have another few years to see where this revolution will take us.