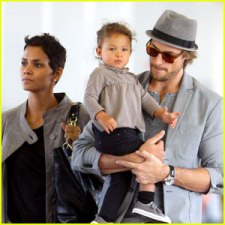 Halle Berry and Gabriel Aubry ended their relationship last week, although there are indications that the relationship actually ended weeks or months ago.

Unfortunately there is a discrepancy on birth dates for Gabriel Aubry which makes it impossible to analyze his chart; some sources say January 4 1976, others say August 30 1976.  Not enough is known about him to make an educated judgment about which date of birth is accurate, but I am leaning towards the August 30 date because of the transits involved.

Aubry lived in five different foster homes when he was growing up which suggests a certain amount of trauma and both charts reflect difficulties in the emotional area.  The August 30 chart shows Saturn square to the passionate Scorpio Moon indicating isolation and loneliness, and a square from Neptune to the modest Virgo Sun suggesting a challenge to developing a clearly defined sense of self.

At the time of the breakup a number of different transits were at work in this chart: Transiting Uranus (freedom and change) in a challenging square to Venus (relationships); transiting Saturn (restriction) and Pluto (endings) in a challenging square to both his Mars (will and motivation) and Mercury (thought process).  The January 4 chart shows no major challenging transits unless there is something going on with the ascendant or midheaven which we can’t know without a birth time.

The January 4 chart includes a challenging square from Pluto to the Capricorn Sun which generally is an indicator for someone who continually reshapes their life as old patterns die and need to be replaced with new ones,  and a detached Aquarian Moon that is squared by Chiron, planet of wounding and healing.  This is a challenging dynamic because the Aquarian Moon resists being pulled into the emotional depths that are required for the Chironic healing process to take place.

At any rate, Halle Berry (here’s her astrological chart courtesy of Astrodatabank) has had a very hard time with relationships over the years with a series of well-publicized breakups and reports of physical and emotional abuse.  Her Sun is in fame-seeking Leo, and her Moon is in Leo as well so there is a strong drive here for recognition.  Leo seeks to be admired for good works and that is a strong motivator to help others, and with her Venus, Mars and Jupiter all in the nurturing sign of Cancer, Halle has a powerful connection to family and loved ones.

The combination of Cancer and Leo can be difficult to balance.  Leo needs the spotlight, and Cancer wants to be home cooking for the family.  Halle’s chart shows Taurus on the ascendant, reflecting her desire for a peaceful and comfortable life of security.  But Neptune sits right on the descendant, confusing the issue and causing her to be susceptible to illusion where others are concerned.  This is a pattern that she came into this life with, as Neptune conjoins the South Node of the past.

Transiting Saturn has been activating two powerful planetary combinations in her chart since last summer.  Uranus and Pluto are conjunct in her chart, as they are in the charts of everyone born in the mid-1960s, and this is a tremendous force for change and transformation.  Saturn seeks to create structure and order, and I suspect that Halle wanted more of a settled home life than perhaps Gabriel was ready for, hence the comment about the age difference.

Saturn has also been opposing Saturn in her natal chart as well as Chiron, pushing the buttons of her emotional wounds (Chiron) and intensifying her desire for stability and structure (Saturn).   A conjunction of transiting Saturn to her progressed Sun has brought additional attention to those Saturnian needs of achievement, success and financial stability and likely caused her to desire a more serious life of planning for the future and creating more structure in her personal life.

It’s still not clear what motivated the breakup but if you put the rumors together you can draw this conclusion:  Under the weight of so many Saturn transits Halle Berry wanted a life that was more serious with more focus on the future, and Gabriel Aubry felt he wasn’t ready to settle down to that extent (hence his comment that the age difference played a role).

Of course I wish them both the best and hope that they can conclude their relationship as amicably as the split began.