Happiness is Contagious! Spread It Around

Happiness is Contagious! Spread It Around 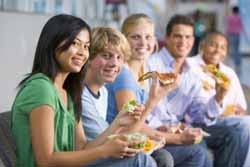 I have long believed, and now teach, that happiness and joy are habits that can be learned.  Depression often runs in families, but it is my belief that this is because of belief systems and habits of reaction that are passed down from one generation to the next.  A new scientific study shows that happiness “spreads among people removed up to three degrees from each other.”

Sadness also spreads in a network, but not as quickly, the researchers found. Each happy friend increases your own chance of being happy by 9 percent, whereas each unhappy friend decreases it by 7 percent. This reflects the total effect of all social contacts.

The study, published in the British Medical Journal, used data from the Framingham Heart Study to recreate a network of 4,739. Fowler and co-author Dr. Nicholas Christakis of Harvard Medical School charted friends, spouses and siblings in the network, and used their self-reported happiness ratings from 1983 to 2003.

So how does happiness spread?  Like a virus, or like fairy dust?  I propose that happiness spreads because when we are with happy people who make us feel good, we let go of our habits of unhappiness and our negative beliefs.  It’s interesting that happy co-workers do not have the same effect as happy friends or friends of friends – perhaps because we are more easily able to separate ourselves from them as being intrinsically different.  And the same effect was not seen among siblings, for whom sibling rivalry may be an issue that keeps the happiness bug from spreading.

At any rate, there is no doubt that the happier we are, the better the influence we have on the world around us.  This positive influence continues to reverberate, improving our own happiness quotient and our ability to withstand difficult times while maintaining a positive outlook.  In difficult times like these, we can still find happiness in areas of our life, and focusing on these positive areas will help to improve our lives and the lives of those around us.