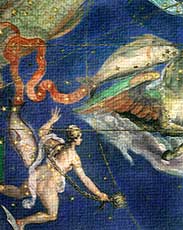 Somehow over the weekend I missed the fact that the Sun entered Pisces on Sunday!

Pisces is the most watery of the water signs, and the last of the twelve zodiac signs. Like a drop of water falling into a river that ultimately flows into the deepest ocean, Pisces seeks to merge into an experience of something greater and more divine, an experience that is beyond this world.

Like Aquarius, Pisces has two rulers which gives it’s nature a greater complexity. Neptune is known as the “modern ruler” of Pisces. Before Neptune was discovered, Jupiter ruled Pisces and is therefore called its “ancient ruler.” Jupiter expands and Neptune submerges, and the nature of Pisces is a combination of the two. Pisces is the chameleon, the shape shifter. There is incredible creativity bestowed by Pisces and other strong Neptune influences, along with a desire to fully experience the divine as we seek to dissolve the boundaries of conventional and ordinary reality. This creativity can sometimes take the form of daydreaming and an easy fall into dramas of illusion.

Pisces is a “mutable” sign, lending flexibility and adapatibility to the personality. Without the inclusion of more fiery influences in the personality, Pisces can suppress one’s physical vitality and drive. The extreme empathy of the Piscean personality offers psychic ability, but can also make it difficult to distinguish between one’s own feelings and those of others.

The ultimate quest of Pisces is to transcend the shackles of ordinary reality and experience the divine while keeping two feet firmly planted on Planet Earth. Please bear in mind that an individual’s astrological makeup is far more than their Sun sign, and that the Pisces influence is shared not only by those with a Pisces Sun but also among those with other planets in Pisces or strong Neptune connections in their chart.