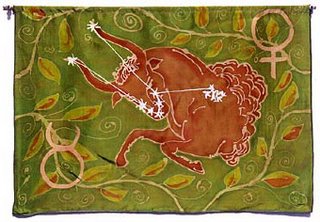 Taurus loves the finer things of life, but is not concerned with status. Taurus prefers a lovely old car that is unceasingly reliable to a fancy sportscar that requires lots of maintenance. Delicious food, soft fabrics – substance rather than status is the domain of Taurus. They tend to be rather simplistic and dislike nuance, preferring a world where everything is clear to a confusing picture of half-truths and dualities. This can create a dogmatic nature that is unyielding in its prejudices, and this is the shadow side of Taurus.

In relationships they are steadfast and true, but may lack imagination required to sustain romantic excitement. Like the bull, they can be stubborn and immoveable once they make up their mind and they will always know best what is good for you, having done the research and established that sense of commitment to an idea that is inherent in the Taurus nature.

In mythology, Taurus is associated with the legend of the amorous Zeus who took the form of a magnificent white bull in order to ensnare the lovely Europa in his amorous advances. He was so calm and placid that Europa had no fear and climbed upon his back, immediately after which he plunged into the sea with her and swam to Crete where he became her lover. She bore him three sons, one of whom was Minos who introduced the bull cult to Crete. This story shows the seductive side of Taurus, whose calm and placid demeanor calms the hearts of all that they encounter.