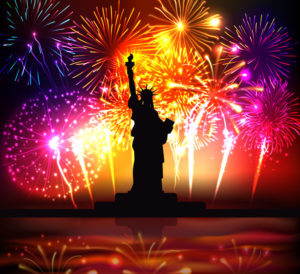 I’ve been writing a lot about the return of Pluto to its place in the US chart which will occur in the next few years.  Pluto returns are very rare since they happen only every 248 years and very few governments last through their Pluto returns, although there are exceptions such as the Roman Empire.  Pluto transits tend to dredge up the darkness from the psyche so that it can be exposed to light and ideally dispelled, and we have seen this dark underbelly of the American psyche emerge over the past few years.  This is the clear influence of Pluto, which has been transiting sensitive points in the US chart since 2008.

We have an important election coming up in 2020, and the candidates will be decided in the Spring of 2020 so this is an important 12-month period for American politics.  Saturn, planet of tests and challenges, will join up with Pluto in early 2020 and the two will be hammering the US Pluto in January and February next year. However, this year there is also a harmonious trine from Saturn to the US Midheaven – the government and reputation of the country – which ought to at least help the reputation of the US among world nations.

The Solar Return chart is a snapshot of the year ahead and helps us to get a sense of what the next year will bring.  The Sun in this chart sits prominently on the ascendant of the Solar Return chart, an auspicious and beneficial placement which is very good news!  However, Pluto is in the seventh house of partnership, suggesting that there will be some breakdowns in alliances between nations.  The seventh house also represents “the other,” and in the US right now I think we can place the immigration issue in that house as well.  In addition, the Moon (emotional heart of the nation) is exactly conjunct Chiron, indicating that more healing is required before growth can occur.

Solar Return Mars is in the eighth house of death and taxes, exactly opposite Mercury so the hateful rhetoric is likely to continue.  The Black Moon Lilith is right there conjunct Mars and ensuring that the feminist viewpoint is heard, and all of these planets are entwined with the lunar nodes of destiny and past karma.  The sins of the father, etc.

Still, there is some good news with Jupiter (good fortune) in a trine to Neptune (spirituality and creativity), and between Saturn (stability) and Uranus (innovation).

The New Moon (the alignment of the Sun and Moon) in the progressed chart is a time of new awakening.  It brings a rebirth of some kind, and a sense of a new beginning.  The US will have a Progressed New Moon in 2024, around the time that the Pluto Return is completing its cycle.  This suggests to me that the continued national stress between 2020 and 2024, while this could cause a major critical breakdown, will result in some kind of breakthrough and new beginning in 2024.