Happy Chinese New Year! It’s the Year of the Rooster

Happy Chinese New Year! It’s the Year of the Rooster 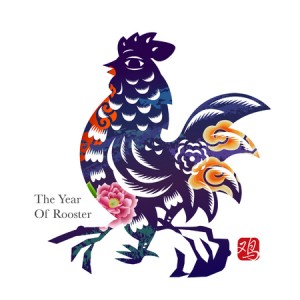 I don’t know much about Chinese astrology, but I do know it’s more involved than just assigning an animal totem to everyone born in the same lunar year.  I found this website which used my day and year as well as time to calculate a few more details about my signs in the Chinese system.  I’ve always known I was born under the year of the Dragon, which sounds very cool until I discover that I’m actually a white rabbit born in the year of the Dragon.  Not quite so impressive!  I was unable to find any site that explains what the white rabbit means, but the “rise and fall of your life” suggests that my best years will be between ages 60 and 80 so that’s encouraging.

But I digress! The Year of the Rooster (which apparently is gender neutral in the Chinese language) could bring these qualities according to one website:

The Rooster, the tenth Chinese zodiac sign, gives the year that just begins some of the characteristics of the bird it has as a symbol: ambition, pride, the desire to be admired, punctuality, courage, passion and a well-developed disposition for love and seduction. At the same time, during the year that has just started, an increase in enthusiasm, perseverance and auto-control will be felt. The relationships between people will be under the sign of great honesty.

We will all prove to have more passion in life, especially regarding work, where we will not hesitate to roll up our sleeves in order to reach our objectives. “Always higher, always going on” is the motto of the Rooster and it will inspire all of us. Braver than usually, we will not be defeated by difficulties and adversities. However, we will have to maintain our spirit’s flexibility, because under the influence of this king of the yard, which, according to Chinese people, is very conservative, we risk being inflexible and refuse changing ideas or life strategies, even though they might be inadequate for the future.

As a whole, 2017 will be successful for businessmen, athletes and soldiers; in general. for people of action. If you are used to acting first, and then thinking (generally speaking), if thoughtfulness drives you into a deep melancholy and dynamic action gives you strength, then the Red Fire Rooster will appeal to you. Initiative, industriousness, generosity, and honesty are the key positive features of this time period. Fanaticism, egocentrism, and coarseness — these are the weaknesses which you should rid yourself of.

As with any form of generalized astrology, this information is for entertainment use only and should not be confused with the ancient complex art of astrology, Chinese or otherwise.