Happy Inauguration Day! A look at the chart for the US

Happy Inauguration Day! A look at the chart for the US 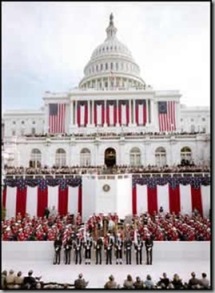 No matter what side of the election you were on, there’s no denying that this is the beginning of a new era in American politics.  One of the major planetary cycles occurring for the United States right now is the challenging transit (square) of Pluto (death and rebirth) to the Midheaven of the US chart (I use the Sibley chart), signifying the government and position of the nation in relation to the rest of the world.

The Watergate burglary occurred during this period, and after the burglars were convicted the coverup by the Nixon administration was revealed under the auspices of the second hit of Pluto over the US Midheaven.  Previous to the Watergate burglary, with Pluto hovering within two degrees of the US Midheaven, the Pentagon Papers were released, revealing years of government deception.   Pluto, in its guise as Lord of the Underworld, takes us into the darkness of closely held secrets and reveals them, and the American people have not trusted their government since then.

Here we are today, with the next Pluto transit affecting the US Midheaven, and we are in an eerily similar situation to the previous Pluto cycle – stuck in a quagmire of a war, with the secrets of theBush administration that got us into the war just beginning to leak into the mainstream.  This time, though, we have a new government in place, so perhaps rather than the destructive side of Pluto, which dismantles the status quo in order to rebuild something more durable, we will see the regenerative side of Pluto.

It’s an interesting aside that when Pluto made a square to the US Midheaven in 1913, the entire economiic system was transformed with the advent of the income tax.  Under the current Pluto cycle, our economic system is under a great deal of pressure to transform in some way, and I suspect that we will see a breakdown in the areas of the economic structure that are corrupt and poisoned.  This is a necessary cycle, required so that new life can emerge out of the ashes.

There’s also the obvious element of transformation that comes with having an African-American president and how that will affect the entire black community and its relationship to the government. As I have heard from my black friends for many years, the distrust of the US government in the black community goes deep, and putting a black face on the presidency will serve to change the way we look at ourselves as Americans.  It is certain to change the way that other countries view us as well, reflecting the transformation of Pluto at the Midheaven – the role of the US in the world at large.

Pluto will also be transiting in difficult aspect to Venus (relationships, alliances) in the US chart beginning March and continuing over the next couple of years.  Relationships are crucial to the American way of life as shown by the conjunction of Jupiter (expansion) to Venus in the US chart, both in the seventh house of partnerships and open enemies.  The combination of these influences suggests that the US has trouble distinguishing between who is the ally and who is the enemy, and under the Pluto influence we could be forced into battle with a nation that appeared friendly but was not.  In today’s current climate there are countries with governments that are friendly to the US, but which are run by other groups which are not.  Pakistan is a good example of this, where the Taliban has taken over a great deal of the tribal region.

There is also the matter of the opposition from Saturn to Uranus which is forming a square to Mars in the US chart.  Uranus (radical change) began the square back in April and May of 2008, when all of the presidential candidates adopted Obama’s call for Change with a capital C.  The Uranus cycle concludes in February, but the Saturn cycle just began in December and January as Saturn turned retrograde exactly square to Mars in the US chart.  A challenging transit of Saturn (restriction, limitation) to Mars (aggression, action) is like driving with the brakes on, and under this influence it is difficult to move forward and attain one’s desires.

Fortunately, transiting Chiron (wounding and healing) will be in harmonious aspect (trine) to the US Mars this year, which will help to refocus our attention and change the things that we want to do (Mars) to realign with our core values (Chiron).

The lunar eclipse on February 9th could be particularly beneficial, since it will form a sextile (harmonious aspect) to the US Mars and a trine to Chiron in the US chart, facilitating healing and any confrontations that have arisen.

Barack Obama has opened up his grassroots movement into the Presidency, where we can all have a much greater influence in our government and in the way the nation evolves than ever before.  It’s truly a new opportunity for a new government (Pluto square the Midheaven) – by the people and for the people.