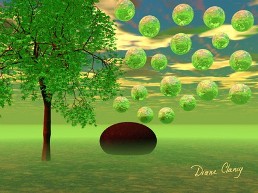 Art by Diane Clancy I have always found it interesting that the timing Christian holiday of Easter is based on the lunar cycle and the Spring Equinox.  The holiday that the Christian world celebrates as Easter retains much of its pagan roots as a fertility festival and a time of balance as the days and nights (in the northern hemispheres) are of equal length. Even the name “Easter” is taken from the Saxon fertility goddess Ostara or Eostre, who is related to Astarte in ancient Babylon and Ashtoreth in ancient Israel.  And the Easter bunny is, of course, an old pagan symbol of fertility.

The resurrection story of Jesus is virtually identical to the tale of the resurrection of the Phrygian god Attis who preceded him:  According to Gerald Berry’s Religions of the World: The Record of Man’s Religious Faiths Primitive rites, Buddhism, Judaism, Islam, Christianity and others written in 1965, “About 200 B.C. mystery cults began to appear in Rome just as they had earlier in Greece. Most notable was the Cybele cult centered on Vatican hill …Associated with the Cybele cult was that of her lover, Attis (the older Tammuz, Osiris, Dionysus, or Orpheus under a new name). He was a god of ever-reviving vegetation. Born of a virgin, he died and was reborn annually. The festival began as a day of blood on Black Friday and culminated after three days in a day of rejoicing over the resurrection.”

Another interesting aspect to the timing of Easter is its combination of the solar and lunar calendar, taking place as it does on the first Sunday following the 14th day of the lunar month following the Equinox.  The Jewish festival of Passover, which was certainly celebrated by Jesus and his followers, takes place on the 15th day of the month of Nisan in the lunar calendar, which is the first Full Moon after the Equinox.  The ancient Christian leaders, probably wanting to differentiate their Easter holiday, uses an “ecclesiastical” full moon rather than the actual lunar event.  (Passover, however, is not a resurrection festival.)

Other ancient cultures celebrated the resurrection of their dying gods:  Osiris, Tammuz, Dionysus – all are gods who died and were reborn anew. In the Spring, when life springs forth anew from every tree and flower, there is a sense of resurrection and rebirth and an opportunity for a fresh new start. Even in Islam there are some stories (not universally accepted) that Mohammed ascended to heaven on a a white horse, although no effort is made to connect this phenomenon to the Spring resurrection festival.

Let us celebrate this renewal, no matter what our faith, and the beginnings of Spring!