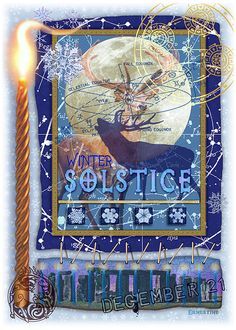 The solstices and equinoxes (cardinal points) have an important correlation to the tropical Zodiac – they mark the date on which the Sun moves into the each of the cardinal signs.  The cardinal year begins with zero degrees Aries at the vernal equinox in March and ends with the winter solstice at zero degrees Capricorn in December so it’s not surprising that the early Catholic church set these dates for the gestation of Jesus.

At the Winter Solstice we celebrate the death of everything that is lost to us and the rebirth of a new life that emerges as we move into light.  The Sun has just moved into Capricorn which requires a degree of practical application and a letting go of our fantasies and hopeless desires which makes it an excellent time for planning and setting goals that are so typical this time of year.

Still, the rituals of our shared heritage remain important for our communities.  Christmas traditions, the lighting of Hanukah lights, the gathering of families for the Kwanzaa celebrations – these are all important ways in which we bring our tribe together to focus our energies for healing and wisdom.

So no matter how you celebrate this important time of year – I wish you the greatest of blessings!